Avatar: The Last Airbender is one of the highest rated animated series of all time. It is set in a world that is divided into 4 nations – the water tribes, the earth kingdom, the fire nation, and the air nomads. Some people in this world possessed the ability to “bend” 1 of the 4 elements. The avatar, who is reincarnated into a different nation after their death, is the only person who has the ability to bend all 4 elements. The show follows avatar Aang, an air nomad who after being frozen in a block of ice for 100 years, wakes up and finds himself during the 100 year war. He learns that his people and culture were completely wiped out by the fire nation, and it is his duty as the avatar to restore peace to the world and end the world. 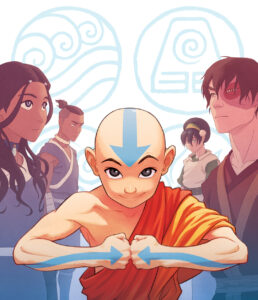 The show aired for 3 seasons from February 2005 to July 2008. The series was never cancelled, as it had been planned to run for only 3 seasons in order to wrap up the storyline. The show became beloved by many. After the show ended, fans wanted more. The show was full of a diverse cast of characters and many fans wanted to know what happened to them after the series ended. After the series ended, many one-shot comics were published. Starting in 2012, graphic novels began being published about the series. Each graphic novel would contain three volumes. These graphic novels vastly expanded the world of Avatar: the Last Airbender. These graphic novels began being published around the same time that a sequel series, Avatar: the Legend of Korra, began airing on TV. After the Legend of Korra finished airing, this series also had graphic novels published that continued the story and expanded the lore of the series.

Despite the popularity of the television show, many fans do not even know that the graphic novels exist. I only started reading them a few years ago, and in my personal opinion, the quality of the story is just as high as the quality of the show was. It’s interesting to see a show that you love get continuation in the form of graphic novels. Even now, new comics are still being published. A lot of lore in the Avatar universe comes from the graphic novels. By continuing an animated show through comics, instead of novels, the stories stay closer to their source material.

2 thoughts on “Avatar: The Last Airbender – The Continuation of a Television Show Through Graphic Novels”