In May 1939, the 27th issue of the Detective Comics was released, introducing Batman. He quickly became known as a new hero who worked alone. Not long later, people realized that the Bat-signal in the sky draws the Dark Knight. Today, that same symbol will not only notify Batman, but a Robin or even a Batgirl may not be too far behind. However, many people don’t realize how large the Bat-family has become. Behind the walls of the Wayne mansion (you didn’t hear it from us), the vigilante family is steadily growing.

The first Robin, a.k.a. Dick Grayson, was introduced in Detective comics #38 in April 1940. This was a way for the publishers to expand their graphic novel audience to a younger age group- and it worked. He was taken under Batman’s wing after the death of his parents and is usually seen as the Robin figurehead in all Batman related media.

Jason Todd is Robin #2, appearing in issue #357 in year 1983. He took up Dick Grayson’s old post when the original Robin donned the new name of Nightwing and joined the Teen Titans. Jason’s parents may or may not be alive depending on which DC universe you read, but even if they were, jail and drug addiction weren’t the right choices to raise him in. Bruce Wayne brought a second boy into the mansion and trained him to be the next Robin.

Tim Drake was a much needed break for Bruce. Tim has so far been the only person within Gotham City to connect the dots and find out that Bruce Wayne was the Batman. After following the millionaire around- along with some begging, pleading, and showing that he was made of the right material- Drake became the third Robin. As with the others, he grew and took on his own persona as Red Robin (yumm) in later editions.

Batman only has one Robin that is actually related to him, Damian Wayne. He was conceived and grown in a lab, unknown to Bruce until his mother dropped him off. Even with his cocky-attitude, he turns out to be almost a carbon-copy of his father. With some extra training into how to be a decent human being, Damian takes his place as the fourth Robin.

There are many more members and various universes where Batman has more or less members in his family. A special note can go out to the other Robins such as: Carrie Kelly, Duke Thomas, and Stephanie Brown.

Then we mustn’t forget about the Batgirls, who keep the Bat-name going. The first one is known as Barbara Gordon who was introduced in Detective Comics #139 in April 1961. Her father, Commissioner Gordon, didn’t want her to be involved in law enforcement. So she agreed and became Batgirl instead, helping out and teaming up with Batman in the process.

Other Batgirls include Cassandra Cain and Stephanie Brown. Both of which don the Batgirl cape at some point before or after taking on their own vigilante name.

Batman even has a counterpart known as Batwoman. Kate Kane and her sidekick/cousin Helena Bertinelli as Bat-girl were brought into the Detective Comics universe in 1956.

There are also other Bat-related characters who deserve recognition, even if they don’t have decades-worth of movies about them… yet: Batwing, the Batman of Africa; Terry McGinnis, future Batman; Ace, the Bat-Hound, and Bat-cow. 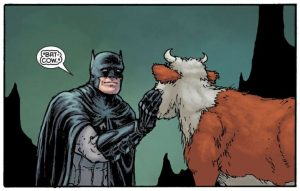 Over time, many spin-offs and alternate DC Comic universes have been created. It’s hard to keep up with which story line to follow and what is official or not. No matter if they are related or not- or even human or not, the Batfamily has been slowly growing and Bruce can’t help but to say that he doesn’t always work alone. There are many characters who come and go as the plot needs, but one thing remains true: Alfred Pennyworth, the trusty butler of Wayne Manor, is always there.