Bruce Wayne is a man constantly reliving his traumatic childhood, fighting through it by playing dress up and sneaking out at night. The Fantastic Four is a dysfunctional American family where four childhood friends play house with Sue Storm and Reed Richards fulfilling the roles of mother and father. Captain Marvel is a literal child who upon his command takes on the form of a super powered adult man.

Superheroes as children’s entertainment, supply these empowerment fantasies, mixing imaginative play with the agency of parental roles. Perhaps more than any other work, these ideas of individuals attempting to fill the roles of their parents, are most overtly displayed in Jeff Wadlow’s Kick-Ass 2, an adaptation of Mark Millar’s graphic novel and sequel to Matthew Vaughn and Jane Goldman’s original film adaptation. It is a movie overflowing with freudian ideas, featuring a boy dressed as his mother, another dressed as his father figure, and a girl who sets out to destroy a woman named Mother.

We are introduced to our villain as he is being emasculated by his own mother. The young man, overflowing with adolescent rage over the death of his father, is now clad entirely in black and sporting a punk hairdo. But when he brings up Kick-Ass, his father’s killer, his mother simply tells him, “You’ve gotta stop obsessing over this superhero.” reducing his cry for vengeance to a childish fixation with fantasy.

“I hate you!” D’Amico cries as his mother lies down in the tanning bed,  “You home-school me like I’m a prisoner! You threw away my Red Mist costume.” In his temper tantrum he begins to kick away at the tanning bed. “I wish you were dead!” But his impulsive wish becomes startlingly true as sparks begin to fly from the device and it is turned into an early coffin. A final, childish squeal of “Mommy?” escapes from the boy’s lips.

While Chirs D’Amico is only one of three characters in the movie to have their mother die an early death, the film makes little to no reference to any of these women. During the course of the movie, all three characters only seem concerned with vengeance for their deceased father figures. In the reality of the film, maternal figures are simply an obstruction to adulthood and maturity.

Soon D’Amico is going through the belongings of his parents in an attempt to fulfill their now absent roles. It is here that we are introduced to the objects that he takes on from both his mother and father that form his new identity; The first of which being the dual pistols.

Javier: Damn, she had a nice pair of guns.

Javier: I was talking about these. (Presenting the guns to Chris)

Chris: Oh, those. Those were my dad’s.

From their very introduction the sexual nature of the guns is made explicit. Our villain makes sure to clarify to both his aide, Javier and the audience the phallic meaning that the weapons carry. 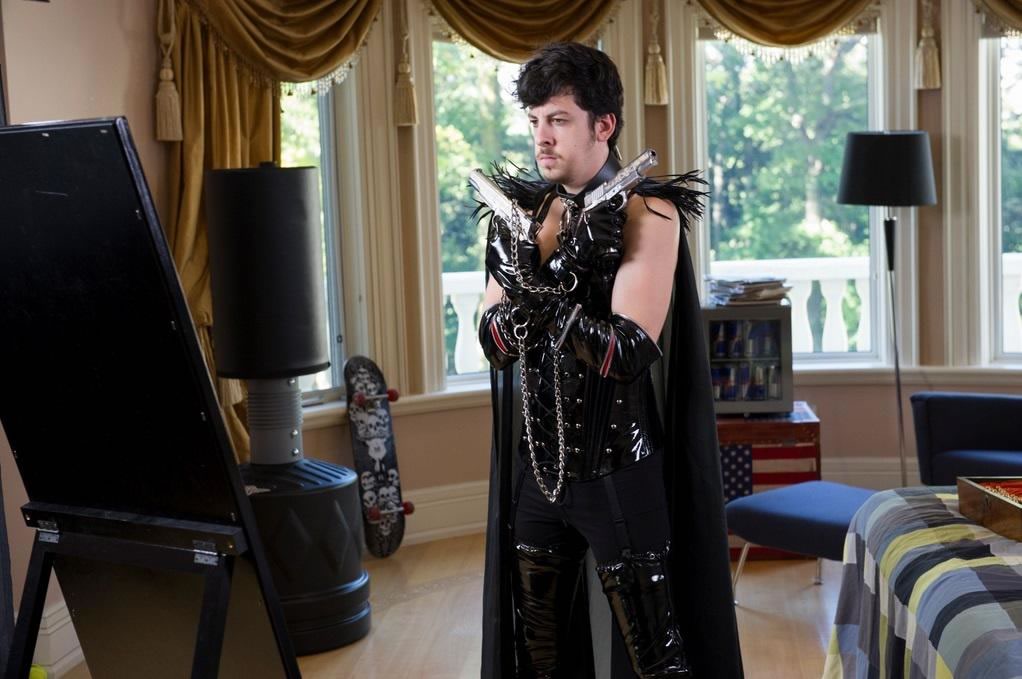 This is immediately followed by the two characters coming across a leather S&M outfit that belonged to his late mother. D’Amico decides to don the fetish gear and wear it as his newfound villain costume.

“I know what my role is in this, Javier. My dad was a crime boss, so it just makes sense. I’m a supervillain. It’s evolution…Henceforth I’ll be known as The Motherfucker.”

In the psychosexual state of his “Oedipus Complex” it would seem from his speech that the title, “Motherfucker” is meant to signify that he has now taken on the role of his father, the person who would “fuck his mother.” The joke being that the S&M outfit, consciously or unconsciously to D’Amico, subverts this traditional interpretation of the phrase and instead twists the title into meaning “a mother who fucks.”

This possibly unintentional appropriation of his mother’s identity leads to the villain’s inability to properly wield the masculine power he inherited from his father. This is first seen as he attempts to rob a convenience store. An elderly man, unafraid, critiques his handling of the dual pistols, telling him, “You’re gonna bust your own face when that gun kicks if you don’t hold it properly.” which then occurs immediately afterwards. This same idea is displayed in a more literal fashion in a later scene where he is unable to maintain an erection. Once again the film mocks him in his inability to assert his masculinity.

Allusions to femininity extend to the antagonist’s team of super villains, which he titles the “Toxic Mega-Cunts.” The main hench-person, a large muscular woman and former KGB agent, is given the name of Mother Russia; Her main lethal move being the ability to snap her victim’s neck in-between her legs.

If our villains represent femininity, then our heroes represent masculinity. Much like Motherfucker, Hit-Girl is also mourning the death of her father who went by the superhero moniker, Big Daddy. In memory of him, she forms the daily ritual of putting out two mugs of hot chocolate with extra marshmallows. Though in her training of the film’s hero, Kick-Ass, a paternal bond begins to form between the two characters. One training montage ends with the two bonding over the very same mugs of hot chocolate, making the fulfillment of the father role clear.

Yet this relationship is complicated even more as Hit Girl begins to experience her first sexual stirrings and starts to feel a physical attraction towards Kick-Ass. This begins, what Sigmund Freud would refer to as an “Electra Complex,” a psychosexual stage where “the girl desires the father, but realizes that she does not have a penis. This leads to the development of penis envy and the wish to be a boy. The girl blames her mother for her ‘castrated state… then represses her feelings… and identifies with the mother to take on the female gender role.” This penis envy can be seen in Hit Girl’s use of phallic weaponry. Her arsenal includes guns and throwing knives, though the main weapon is a large, double bladed staff which she often uses to penetrate her victims.

Kick-Ass is also lead to avenge not one, but two father figures that die during the course of the movie. The first of them being Colonel Stars and Stripes, the leader of the superhero team, Justice Forever; The Colonel having his neck snapped between Mother Russia’s legs before being decapitated. The second being Kick-Ass’s own biological father. In an inversion of the film’s central theme, his own dad gives himself up to the police, claiming to be Kick-Ass in order to protect the identity of his son. While in prison, Motherfucker has Kick-Ass’s father beaten to death in order to taunt his nemesis. It is only after the destruction of these two paternal figures, that Kick-Ass makes the final move forward, donning the armor of Big Daddy in the film’s final battle.

In the climax of the film we have Big Daddy versus The Motherfucker; A domestic dispute in the form of a large scale battle where hordes of superheroes and villains square off against one another. Fittingly, Hit Girl, our Electra figure, finds herself up against Mother Russia. Like other characters in the film, Hit Girl does not simply wish to “take on the female gender role.” She wishes to take over the role of her parental figure. And like D’Amico, the mother is the obstacle that stands between Hit Girl and adulthood.

While the young girl utilizes her famous blades, Mother makes clear she has no need for such weaponry. Before their fight begins, she discards her own knife by plunging it into the table. The muscular woman simply brushes off every attempt that Hit Girl makes to use her penetrative weaponry. She breaks her double bladed staff and blocks her throwing knives and pistol shots. With every action, Hit Girl’s attempt to appropriate masculine power is belittled.

But as she finds herself being crushed between the leg of Mother Russia, Hit Girl unleashes her final plan. She takes out a syringe, but Mother grabs it from her. “You think you can kill me with a little needle?” she says, once again mocking her phallic weaponry. In an attempt to turn her plan around on her, Mother injects Hit Girl with the fluid. But of course, that was the plan all along. Now empowered by the literal adrenaline of the phallus, the young girl finds the strength to defeat Mother, repeatedly penetrating her with shards of glass. As the woman falls to her knees, Hit Girl utters one last line, eliminating any possible ambiguity from the moment. “I thought a cunt like you could handle all those pricks.”

With Mother out of the way, there is now nothing keeping Hit Girl away from being with her new Big Daddy. In one of the film’s final moments, the two share a kiss. The son has become the father and the daughter has become the mother. And then there is Motherfucker, who as we see in a post-credits scene has been punished by being symbolically robbed of his masculinity as he lies helpless in a hospital bed and speaks the line, “A shark bit my fucking dick off.”

And we, the audience, are left with a film where children must achieve maturity by overtaking the role of their parents, in a world where fathers must be avenged. It is a movie where only real empowerment can be achieved through masculinity, and any matriarchal roles that might exist must be de-feminized and replaced with the figures that celebrate true masculine power, lest you get killed with a bunch of “pricks” or have your dick bitten off by a shark.

Thank you for reading.

Kick-Ass 2 is available for digital rental on Amazon and Vudu.