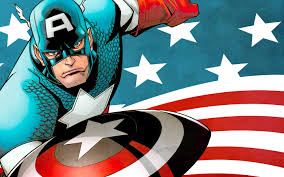 With the introduction of the Marvel Cinematic Universe and all the movies that file under that, people are generally aware of who Captain America is:  he dresses in the United States flag and is a modern-day Uncle Sam.  He truly is because he was created as a political move.

The first Captain America comic was introduced in December 1940 though it has a March 1941 date on the cover issue.  World War II was already underway by then and as the world was introduced to the atrocities that the Nazis were committing, there was a debate on if the U.S. should join the war or not, especially if it did not directly affect the country.  Writer Joe Simon was for the U.S. joining the war and he conceived the idea of Captain America:  a figure who would fight the Nazis and inspire others in the U.S. to join the cause.  Indeed, the cover issue had Captain America punching Adolf Hitler and sold almost a million copies due to the idea that America was the only one that could stop Hitler and end the war.

Captain America’s popularity grew and so did American patriotism as each issue released per month sold over a million copies.  While the popularity of superheroes and Captain America declined after World War II with the ideals of the 1950s, in 1964 he was reintroduced to the public during the Vietnam War when the Gulf of Tonkin incident happened and the U.S. had the reason they needed for sending more troops over to fight in the war.  With support from the people and the growth of patriotism, Captain America was a perfect figurehead for people to believe in.  However, with the idea of the comic, Captain America being frozen and now revived, having to adapt to a society different from his lends the idea that Simon wanted to use Captain America for the soldiers instead of the public because the soldiers had to come back from war and adapt to a different, non-threatening society they were no longer used to.  Though Captain America was still a call for people, especially Americans, to not sit back and watch the wrongs in the world but to fight them and help, there is more of a depth to it in understanding that the people who go out and fight are changed because of that which lets Captain America mean something to the soldiers who aren’t understood which is a political move in trying to bring together the population and promote understanding.

Since being reintroduced in 1964, Captain America hasn’t gone out of print and has spawned numerous different superheroes as well as being a prominent figure in Marvel movies. He is a figure of politics and political maneuvering, especially since his role in the newer movies is taking down a corrupt government which is relevant to the world today.  He was created to inspire others to follow in his footsteps and he does a good job of it.