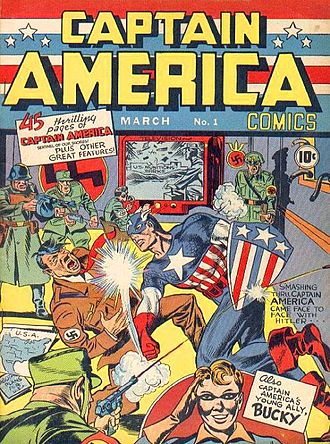 Comic books are not just around for entertainment.  Most typically have their own type of political agenda as well.  Back in the 1940’s, super hero comics showed the nazis and the Japanese as the villains.  This is when Captain America was created.  They used captain america as a way to gain support for the war by showing the real life villains in the comics.  They also did this in Superman comics around this time.  Instead of just fighting villains in metropolis, he went abroad and fought america’s enemies as well.  Not only did this entertain people, it was used as propaganda to gain support for World war II.  Both the Nazis and the Japanese were portrayed as animalistic, weak, and evil.  They wanted civilians to see  these people as less than human so full support could be received to go to war.  War propaganda is not the only political agenda used.  In more recent Archie comics they have added gay characters.  Cat woman is bisexual.  Marvel remade Thor as a woman.  All these changes to comics were made to change the social norm in america.  The influence may not be great but it is making all of these social issues normal and seen rather than still being a controversial topic.