Since modern comic books cover such a wide range of topics, types, and age ranges, it is often helpful to classify them into standard literary genres. For instance, one aspect of the comic This One Summer that we discussed in class is how it can be considered a young adult novel; there is also further exploration into this topic of YA literature in comic books in Hmoseley’s blog post. While most, if not all, superhero comics are accessible to a young adult audience, some can be seen to utilize certain story elements, including some well-used YA tropes, to specifically target this audience. One such comic is Allan Heinberg and Jim Cheung’s Young Avengers.

The premise of the Young Avengers is that after the Avengers disbanded in the comic Avengers Disassembled, a group of vigilante teenagers formed their own team to fight crime in their place. Due to their similarities to certain members of the Avengers, they are dubbed the “Young Avengers” by reporter Kat Farrell and J. Jonah Jameson. The original team members were Iron Lad, Patriot, Wiccan, and Hulkling; both Hawkeye (Kate Bishop, not Clint Barton) and Stature join later in the volume to help the team fight Kang the Conqueror.

The most obvious aspect of this comic as YA fiction is their age; all of the members of the Young Avengers are high school-age teenagers. This is typical of almost all popular YA literature of today, from The Hunger Games to Harry Potter. Teenage characters are appealing to many YA readers as it makes the characters (and their troubles) more relatable. The more similar the character is to the reader, the easier it is for the reader to put him/herself into the shoes of the protagonist. Indeed, much of the humor and charm of the Young Avengers is that they are teenagers who behave like actual teenagers; they fight with each other, they make mistakes, and they are occasionally pretty out-matched by the adults around them. As a YA trope, I think this comic is fairly successful in creating characters that are clearly set apart from the adult heroes in other comics. The Young Avengers may operate in an adult world, but they act and react to their surroundings in a way that is appropriate for their age, something that is a staple of YA literature.

Another fun aspect of this comic is the idea that the members of the Young Avengers try to fight crime but often don’t really know what they’re doing. This leads to some humorous moments that aren’t typical of many superhero comics; for instance, in comics featuring adult heroes, what to do with the criminals after you’ve incapicitated them isn’t something that’s generally brought up. But there’s a deeper meaning to this kind of humor. Most readers in this age range are in that awkward transition between child and adult; they are old enough to begin engaging in ‘grown-up’ activities, but not quite sure how to do them yet. Even as college students, we often have moments when, after having taken for granted the things we saw our parents do all our lives, we discover that we have no idea how to accomplish some basic life skill. I think this idea of trying to do something without really knowing how is a key aspect to YA literature: readers can strongly identify with protagonists who are beginning to act like adults but are still struggling to figure out how. This is one of my favorite parts of the comic; not only does it add to the sense of realism, it is something that all young people can simultaneously laugh at and commiserate with.

Another YA aspect that this comic fully embraces is romantic subplots, a topic that is ubiquitious in modern YA novels. While there aren’t any love triangles as of the Heinberg/Cheung iteration, this comic has its fair share of young love, all portrayed with various degrees of success. One of the things that Young Avengers has been most praised for is its depiction of Hulkling and Wiccan’s relationship; in 2006, the comic was given a GLAAD Media Award for its representation of LGBT characters. Of the romantic storylines in this comic, this is probably one of the strongest; the relationship between these two characters is sweet, genuine, and completely devoid of any tokenization. Another relationship that is done nicely in this volume is the budding affection between Hawkeye and Patriot. While they engage in a somewhat cliché pattern of hate/attraction, the developing relationship between these two characters doesn’t feel too forced and is appropriately slow-moving. Beyond these two relationship is where the romantic subplots can get to be a little much. In this volume, Stature and Iron Lad fall in love with each other, culminating in a tearful goodbye when one of the characters is forced to leave the other forever. The only problem is that these two characters have only known each other for a few hours. When spaced out issue-to-issue, it may seem that the pacing of this relationship isn’t that rapid; however, when the actual timeline for the events is taken into account, this subplot seems odd, rushed, and contrived. The final aspect of the romantic storylines in this comic that I find somewhat funny is the fact that of the six original members, all of them were in some type of romantic relationship with another member. They may be teenagers, but this still seems (to me at least) to be humorously improbable. Still, while there are definite faults to how romance is portrayed in this series, I think that for the most part the romantic subplots are done in a way that is both realistic and enjoyable to follow. Overall, this comic makes generous use of this YA subject staple in a generally successful way with some minor issues. 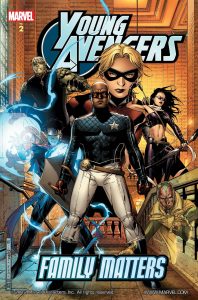 Heinberg and Cheung’s Young Avengers conforms to typical YA literature in many ways. It features a young, teenage set of characters, it demonstrates the difficulties that teenagers face in trying to be ‘grown ups’, and it contains teenage crushes and romance. But Young Avengers can also appeal to young readers, and in fact readers of all ages, with its own unique type of humor, drama, and characters. At many points, this comic is delightfully light-hearted, like when it gently pokes fun at comic book fans (usually through members of the team geeking out about meeting big-league superheroes) or during the witty banter that the characters exchange. At the same time, however, the storylines and plot can be quite thought-provoking; the conclusion of this first volume is both engaging and surprisingly sad. Above all, however, the characters are what really makes this comic. The team is made up of characters that are fun while being down-to-earth, likeable without being perfect, and heroic while remaining realistic human beings. This comic could certainly be considered to be a work of YA literature, as it contains certain plot elements and ideas that are specifically meant to attract a young adult audience. However, it also makes its own mark by not only successfully utilizing YA tropes in a fun and engaging way but by adding its own distinctive flair to YA fiction and to comic books in general.