Pokémon, a vast world full of strange and wonderous creatures. Coming out in February 1996, Pokémon Red and Blue arrived on the Gameboy and exploded in popularity. Two serialized products spawned off these games. The Pokémon anime follow, Ash, Pikachu, & gang, and the Pokémon Manga, named Pokémon Adventures. While the Pokémon anime made it’s own story, the Pokémon manga followed along with the story in the games and took itself 100% serious. Doing this brought new elements to the story, more epic battles, characters becoming full-blown villains, and some quite dark moments.

A series created for children pulled no punches when it came to the manga. The examples that will be showed are all in the first volume of Pokémon Adventures.

The first example is from Chapter 9 – “…But Fearow Itself!” In this chapter Red’s Poliwhirl is impaled by a Fearow’s beak. This turns out to only be an illusion to trick the Fearow into freezing it’s beak, but the panel gives no hint of that at first. The beak can be seen piercing through the entire body of the Poliwhirl. 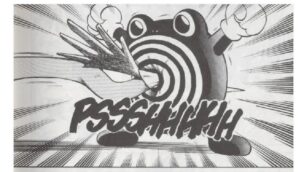 The next example comes from Chapter 13 – “Sigh for Psyduck.” To avoid dissolving, Blue’s Charmeleon hides behind a zombie Psyduck. The Psyduck takes the acid and the panel depicts the pokémon falling apart, exposing its bones to the surface. This normally loveable pokémon is being liquefied very apparently on the page. Unlike the last example, this is a real pokémon and not an illusion. 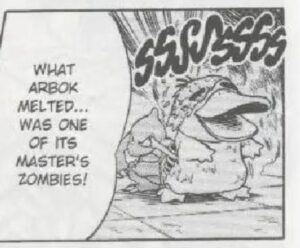 The third and final example is in the next chapter, Chapter 14 – “That Awful Arbok!” In this, Blue’s Charmeleon chops Koga’s Arbok in literal half. And this is an Arbok that has been actively trying to kill the trainers and their pokémon in this chapter and the previous. 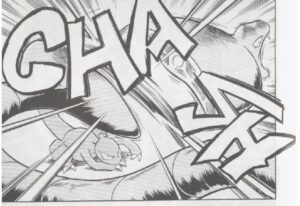 Pokémon is a lovable franchise and has earned its spot where it is. But if you know someone who’s unsuspectingly about to reading the manga for it, it might be wise to give them a heads up.

For those who want to read where all these panels come from, you can get a copy of Pokémon Adventures (Red and Blue), Vol. 1 at Barnes & Noble for a decent price – https://www.barnesandnoble.com/w/pokemon-adventures-volume-1-kusaka-hidenori/1118197183

2 thoughts on “For Children, Clearly: A Dive Into The Not So Kid-Friendly Moments In The Pokémon Manga”