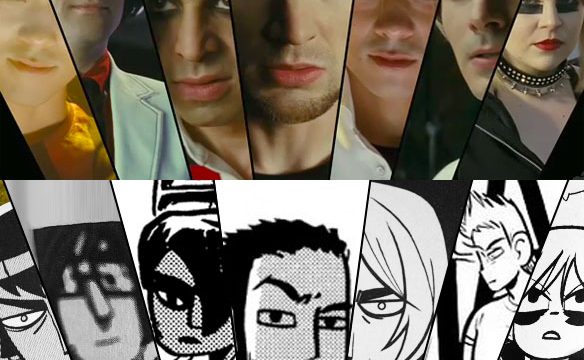 One of my favorite films is Scott Pilgrim vs. The World. It is my go to film when someone I watch a movie with someone for the first time. I think it is extremely entertaining and just an insanely beautiful film. I didn’t know that it was based off of a series of graphic novels until about a year after I watched it for the first time. By that point, I had already seen it at least four times (I tend to watch movies over and over again) so i really knew what was going on. I didn’t expect to see the film, almost frame to frame, when I opened the first book, but thats what happened. While the later volumes of the series were published around the same time the film was being made, and there are many differences between them and the film, reading the first volume was like reading the storyboard of the film. This got me thinking about how similar the shots that make up a film are to the frames of a comic or graphic novel. 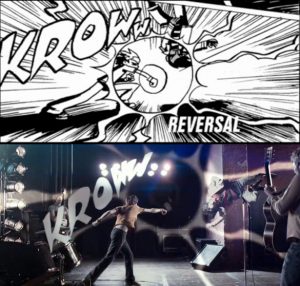 While adapting a graphic novel into a film, the panels of the novel could act like a storyboard for the director, assisting in the decision of how to frame each shot and how to go about filming each scene. This strategy proved to be successful is the film Scott Pilgrim vs. The World. Many of the shots in this film were taken straight from the source material. 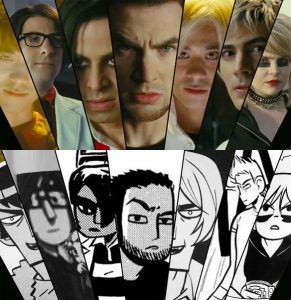 Of course, the graphic novel itself is full of comic book and video game references, so having the word “KROWW” written on screen fits well within the story. In more serious films like the adaptation of Watchmen, this strategy of pulling EVERYTHING straight from the panels might not be as successful. That being said, there are so many similarities between how films are shot and how graphic novels are drawn that combining the two is just a given.

Another example of this can bee seen on the first page of Watchmen. The first panel on this page is a very zoomed in close up of the Comedian’s pin splattered with blood. The remaining panels on the page show the point of view slowly zooming out. This is an effect that is commonly used in film as well as in comics.

To see more similarities between the novel and the film, click here.