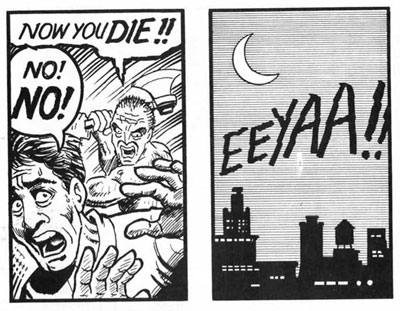 I’m not a very good bowler. I have bowled at various points in my life, but was never really good at it. Growing up in Wisconsin, (home of the bowling hall of fame), a sport like bowling gave people another excuse to drink beer in the winter-time. Plenty of my friends played and were actually quite good. One term used in bowling is “gutter”, and just like any other place in life, it sounds like the low end of an outhouse. I have even cleaned the gutters on my house and it’s not a great place. My basic understanding of the term ‘gutter’ for most of my life is essentially a wasteland. In comics though, it is something entirely different, at least in my mind. Gutters in my mind are endless mental boundaries that actually have physical boundaries. Yes, the panel will have a physical ending before another one starts thus a gutter exists, separating the two panels but in the psychological world of the gutter there are no boundaries, I did not see this gutter as a wasteland. I saw this gutter as a place with endless imagination. Even if just for a split second my mind would be racing with ideas and thoughts about what was coming next. As free as my mind was it did have some direction from the transitions used. The transitions have an effect on what any mind does while in the gutter, movement to movement, action to action, subject to subject, scene to scene, aspect to aspect, the gutter will have a different meaning in all of them. To some extent the narrative of the story that takes place while in the gutter is steered, in some part, by the type of transition, and with the overall narration. The mind all on its own will be racing with ideas about what is to come next, (unless you aren’t really into what you are reading) because the mind refuses to be stopped. It will be running and in the gutter it will truly run wild with whatever ideas the comic is supplying it with. If anything, it’s important to let your mind run wild. Isn’t that what we want these stories to do, take us somewhere, stimulate our imagination, take us to a place we never thought existed?

I found a thesis on the Significance of the Gutter, written by Stig Tornes as he presented it to the Department of Literature, Area Studies and European Languages at the University of Oslo. A couple key things that stood out from his work were; “The gutter can be ideas and themes hidden within its white space, the reader has a part in this because the gutter reflects meaning and narrative order, the gutter depends on two key aspects within the graphic narrative- iconography and closure.” All of this confirmed my own ideas about the gutter, as I had not even heard or realized what a gutter was in comics before this class. Looking at these two concepts the gutter depends on, iconography and closure, I started to understand it more completely. Tornes says, ‘the icon is a representation of something in which we can identify with, while a photo or a realistic drawing is a representation of someone else.’ This really reminded me of any story I have every read and while reading it I try to imagine the story in my head and I see myself acting out the story and kind of like in comics or any graphic narrative, you start to see yourself playing a role in the story. Tornes continues about iconic representation saying, ‘it infers more reader projections to identify and even self-represent oneself, in one or several of the characters.’ Overall this is a great use of envisioning any work of art but especially a graphic novel. To turn words and images into your own representation of it is very powerful. That is how people are inspired. That is how dreams are even dreams. Imagine someone saying that their lifelong dream came from the gutter. Such an oxymoron yet so true and powerful. Tornes second concept that the gutter depended on was Closure. Tornes says, “Closure is the process of literally observing the parts of a graphic narrative and perceiving something whole and unanimous. Closure is not just bound within the gutter, but can also happen within an image, but the strange thing here is that the closure you commit to something you see within an image always relates to the reader but also the story in which you are engaged.” In comics it seems more like narrative closure as one image might not show everything and the reader must think about what happened from the closure, all while doing this in the gutter. This is not uncommon in a wide range of art forms that only paint half of a picture and allow the audience to become involved in their own narration of what is going on.

The gutter also has served as a pause or break for me to envision or think of something that relates to the comic I am reading. I did this a couple times when reading Die Stadt by Frans Masereel. Because this comic had no words, my mind was really running in the gutter. Attempting to narrate the story myself or at least come up with some context as to what was going on was hard but also rewarding in many ways. I actually had a chance to tell a version of the story to myself and I could be way off and be totally fine with it. When talking about the comic in class it turns out that I wasn’t too far off from others thought had happened. A couple times however I was pausing and thinking about this story in relation to our world right now. There seemed to be two factories in The City that everyone worked at. All the employees had quite mindless jobs and no one seemed to enjoy what they were doing. In the gutter I was caused to pause and wonder if the artist did this intentionally. To show hundreds of people in this city working jobs that they did not care about and that really did nothing to better the city itself was something I see today. Day and day went by and they seemed to not love what they were doing. Isn’t that what a lot of our society is doing today? Dead end jobs that don’t better society yet billions of people do it day after day. It makes me sad. I do understand that some people don’t have as many opportunities or simply want to do the mundane job everyday. That’s what the story made me think, and maybe that’s what the author was hoping I would think. Why would you do this to yourself for your entire life? Isn’t there something to look forward to or be proud of in your work? Is there any real skill or talent involved in mediocrity? Seemed like the people working those jobs were as ordinary as ever. And the author made them all look alike and as the story went on everyone started to seem more ordinary and less special or individual. That’s what I don’t want to get caught up in as I leave the University. I’m planning to graduate at the end of this semester (if all goes well) and I have already begun to think about what I am going to do after college and with the rest of my life. While I was in the gutter during this story, I realized I didn’t want to end up like these people in the city. Does the gutter also teach us to think for ourselves? The author of the comic won’t usually be sitting next to you while you read their work, and for the most part you are able to think whatever you want in silence. Whether we realize it or not the gutter is somewhere we should all want to be, an open and vast place with no judgments or restrictions on what we can be thinking. Regardless of the time you may spend in the gutter, you should always appreciate it. Not only is the gutter so important at letting your mind be free, it importantly allows you to carry the rest of the story with you. Maybe the name ‘the gutter’ doesn’t do justice for what can actually take place while we are there but I can understand how it got its name. I’m sure tons of random ideas and afterthoughts spill into the gutter and the reader must weed through them, however I like my approach to it. I think we could all use some gutter time in our days.

Significance of the Gutter by Sig Tornes 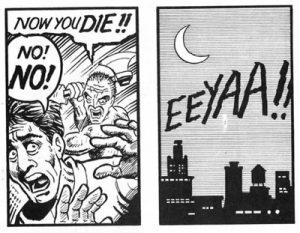 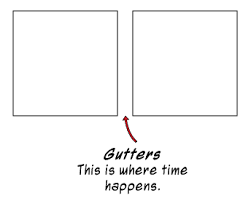