Reason #17 to hate Jack: He woke me up. At 4 AM. To skate at Faber. On a Sunday. Because Jack Zimmerman works harder than God.

Despite never having been a “sports” person, I’ve always been inexplicably attracted to certain kinds of sports narratives. One of my favorite books, Winger, is about rugby players. I’m also a fan of sports anime like Haikyuu! I’ve seen a few football movies and though they weren’t my cup of tea, I definitely understand the appeal. There’s something intensely satisfying about seeing a team learn and grow together. There’s something inspiring in watching a hapless rookie improve himself or a jaded perfectionist learn to open up and make friends. So the fact that I fell in love with Check, Please! (written and drawn by Ngozi Uzaku) is not much of a surprise.

Check, Please! is the story of Eric “Bitty” Bittle, a former figure skater from Georgia who makes it onto his university’s hockey team. The only problem is that Bitty is terrified of being “checked” i.e. getting physically knocked around by other players. The comic is a coming-of-age story set during Bitty’s college years, starting with him as a freshman and ending (presumably) senior year. Other characters include: Ransom and Holster, (“those two guys”), Shitty Knight (no one knows his actual first name), Lardo (the team manager), Johnson the Metaphysical Goalie, and Jack Zimmerman (perfectionist Quebecois team captain).

The webcomic takes the form of Bitty’s vlogs, where he talks about college and baking pies. The vlogs serve as Bitty’s diary, used to frame the rest of the events in the story. Ngozi will often cut between the vlogs and what’s happening in Bitty’s life, providing for both moments of humor and drama. 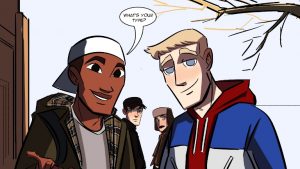 For readers not familiar with the intricacies of hockey (like I was) Ngozi helpfully includes extra comics dubbed “Hockey Shit with Ransom and Holster.” These cover basic terminology like flow, celly, and chirp, as well as other elements of the sport, helping the reader better understand exactly what we’re getting into.

Ngozi also introduced the character of Johnson, the Metaphysical Goalie, who has his own tag on the blog. Johnson is the only character aware of his own fictionality. He came about from a question asked on the Check, Please! blog (“you guys got a weird goalie on your team?”) which was answered by Johnson himself. Samwell University’s goalie had never really been focused on or described, so he became a senior set to graduate and be replaced by a more fleshed out character (see: Chowder). He ended up becoming a fourth wall breaking entity to make up for his lack of presence in the comic’s actual story. Surprisingly, he’s had a lot of staying power.

Though Check, Please! is a funny comic, it’s well balanced by human drama. Jack’s backstory involves an overdose due to his anxiety of trying to live up to his father’s legacy. His drive for success causes him to butt heads with Bitty initially, reacting with jealousy and hostility when Bitty scores the winning goal during a game. Jack also grows frustrated with Bitty’s lack of skill at first. Despite the rocky start, Jack eventually softens up and tries to help Bitty overcome his fear. Though that eventually leads to other complications…

I’ve also really enjoyed Ngozi’s art throughout the comic. You can see her style growing more polished over the years. Comparing the first episode with the latest update, there’s been a clear improvement. The first episode is actually in black and white! Her characters strike a perfect balance between realistic and cartoony. It allows for a wide range of emotions and tones. Check, Please!‘s characters are also diverse, not just in ethnicity or sexuality, but in facial structure and overall design. It’s easy to tell them apart from one another. Another fun element is the addition of animated GIFs into certain comics (the celly comic has a few).

But perhaps one of the most unique things about Check, Please! is that Ngozi utilizes multiplatform storytelling. Like many online creations, Check, Please! has a Twitter account… but it’s actually Bitty’s Twitter. Yes. The character Eric Bittle has a Twitter feed that updates in real time along with the story. Right now, the Twitter is currently locked to avoid spoilers for Year Three, but all of his Tweets have been compiled into PDFs for easy reading. Bitty’s Twitter adds another layer to the comic; it makes it feel more real. The Twitter contains all sorts of extra content for readers and works as a promotional device. It’s a fantastic idea that gives Check, Please! more of an identity as a “web”comic.

There are print versions of Check, Please! available. Year One was published as a book and another Kickstarter recently ended to get Year Two off the ground. Ngozi has also produced two short zines called “Huddle!” which contain fanfiction, fanart, and fanservice in general. (I own the first zine. It’s pretty great.) Though I don’t have access to the books, which could have extras in them as well, I think the comic can be best viewed online. That way, you can see the animation when it’s there and you can easily access links to her blog posts about each episode.

The fandom of Check, Please! has blown up in past years. I think Ngozi is still sort of surprised at how big it’s gotten. The comic used to update under the tag “omgcheckplease” but that was soon overtaken by the fandom, which flooded it with gushing and fan created content. Now that Check, Please! has had two successful Kickstarter campaigns and Bitty’s Twitter has 779 followers, it’s probably safe to say that its popularity can only grow from here.

Anyway, because the story isn’t over yet, I’m excited to see what new twists and turns we’ll experience as it goes on.

If you’d like to read Check, Please! from the beginning (and you should) you can start the comic here. Bitty’s Twitter is here. All images used in this post belong to Ngozi Uzaku.