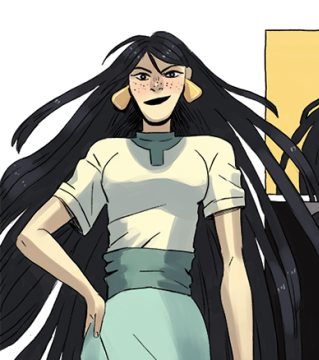 Growing up I remember reading a lot of different kinds of comics that helped to shape my identity early on. Trying to find yourself in media is a standard thing for kids to do when growing up and for me it was never particularly difficult to find idols to adore. Although women in comics have often suffered from being stereotyped or used solely as plot points for male characters, there was still enough of them out there that I can easily look back on my childhood and see how specific characters made me who I am. From Susie in Calvin & Hobbes to Akane Tendo from Ranma 1/2, to Betty Cooper and Wonder Woman, I had a seemingly endless supply of characters I could relate to in some way.

When I think about that fact now, it puts me in a pretty foul mood. In childhood, I had it so easy. I could just open a comic and find someone similar enough to me at such a base level that I could relate to and love them. But doing something like that isn’t so easy if you don’t identify as some very specific things. Even though mainstream comics have made a lot of great strides in being more inclusive and accessible, they’re nowhere near perfect. That is one of the main reasons why webcomics, as far as I’m concerned anyway, are one of the most important things that have ever happened in comic history.

Webcomics are wonderful firstly because they are as numerous as they are diverse and interesting. No matter how you identify yourself, there’s a webcomic out there that has someone like you in it. For example, mainstream comics have historically been terrible at showing the lives of transgender people realistically. A quick look through The Complete History of Transgender Characters in American Comic Books (which is a great read) can attest to that. And while in recent years the mainstream has certainly improved, it’s got a ways to go. In contrast, there are loads of  webcomics out that that both include and revolve around the lives and stories of trans people in a variety of genres. Into magical girl stories? Pretty Heart Bouquet is about a trans magical girl! More interested in slice of life stuff? The webcomic Questionable Content introduced a trans character several years ago who has since grown into a staple of the series. Plus, the series Khaos Komix has two trans characters, Tom and Charlie! Think the real world is boring and want all the fantasy? Well, there’s Prill in Witchy and Phenic in Goodbye to Halos just for you! And this is only a small list with a slice of the full range of characters!

Furthermore, the best part about webcomics next to their incredible range is the fact that most of the time, they are completely free. Artists and writers will pour their hearts out into countless pages of a comic and get nothing in the way of money unless they offer adspace or sell physical copies of their work once it’s long enough. That alone is huge, especially for someone just discovering that their identity is something that, if known to others, could be dangerous. By putting out free comics online that tell a wide range of stories, creators can not only help people who identify with those stories to feel happy but they can also help to spread awareness about these identities. In creating these webcomics, creators can promote the normalization of identities that have been viewed as “other.” It might not be as earth-shattering of an approach as protesting or lobbying is seen as being but it is an important step that must be taken in order to change the culture at large.