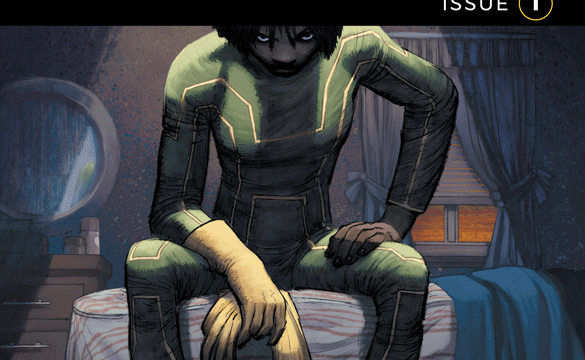 For this weeks blog article, I went to the local comic book store in Fredericksburg to find a graphic novel to write about. I was surprised when I saw that a familiar title had been rebooted. The store had Kick-Ass issues #1 and #2. I was a fan of the movie that was made based on the comic back in 2010, so I purchased both issues. The original Kick-Ass is about a teenage boy who wants to be a real life superhero and fights crime alongside Hit Girl, who is another vigilante. The 2018 reboot of Kick-Ass shares both similarities and differences from the original. It is also written and drawn by the same authors and artists, Mark Millar and John Romita Jr. The protagonist is an African American woman named Patience Lee who returns from eight years in Afghanistan to her family in New Mexico only to find that her husband had left her for another woman to pursue his “music career”. She was left with all his debt and their four kids to take care of. This was unexpected for her so it ruins her plans of going to college while her husband supports the family. With her military background, Patience decides to use her skill set in kicking butt to steal money from gangsters so that she can support herself and her family. She keeps half the money and the other half she gives to charity. She decides she is not a superhero until the end of the second issue when she sees a boy who is abused so she decides she needs to use her talents to help people. 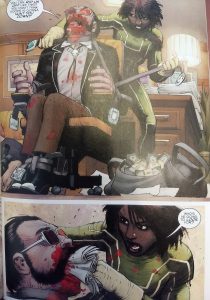 The 2018 reboot of Kick-Ass is similar to the original in that it is very violent which gives it a shock factor. Other than the same costume as the first Kick-Ass, the new Kick-Ass differences itself as a new story. The fact that the character is both female and black can help make the story more relate able to different demographics than the previous. Overall, I thought it was pretty good so I give it a 7/10. My only complaint is that since the main character already has a ridiculous combat ability it makes it less relatable to an ordinary reader. This misconstrues the purpose of Kick-Ass, as the main character isn’t exactly an ordinary person.