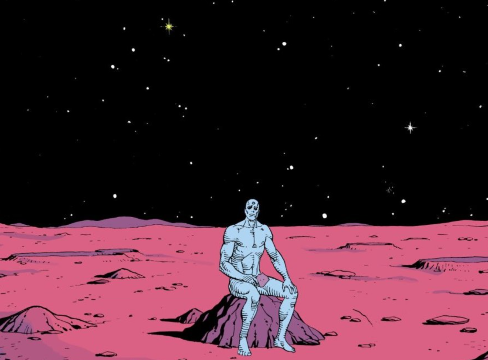 On the surface, the basic language of comics may not be obvious to most readers. Granted, if you are unaware of a well-made comic’s methods, it is doing its job correctly. However, another way to enjoy and appreciate comics is to look at their basic components and understand how they function in order to create a memorable reading experience.

For this article, we will be looking at how a comic uses a point of interest in order to make the act of reading a page feel good. We will be using an example from two different comic series. In our first example, we will look at a  page from the manga series Black Clover (2015).

In this page, we see one character is holding a sword in the air over the head of another character. On one hand, this page is understandable because the illustrations are clear and follow a logical progression from panel to panel. On the other hand, this page is even better because of how the sword is used as the point of interest for the page. While we are able to see two other characters in the middle panel, the sword is the most pronounced thing on the page. Not only does it take up the most space compared to everything else, but the comic’s onomatopoeias have the most focus around the sword becoming bathed in light from panel two to panel three, and form a satisfying s-shape, making the page flow almost seamless.

In our second example, we will look at the final page from Issue #3 of Watchmen (1986).