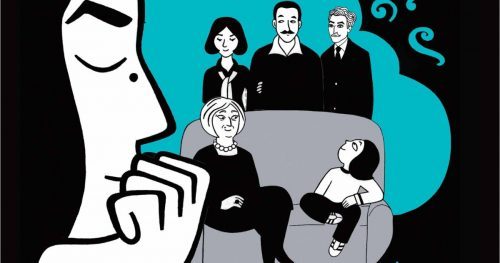 Persepolis is the first and only graphic novel I have read before taking this class. I have gotten to read Persepolis in two different literature classes at Mary Washington, and it is one of the most powerful books I have read in college. Not having any experience with graphic novels before college I was unsure how to feel about reading a novel with pictures in a three hundred level literature class. Like many people who question the academic integrity of the graphic novel, I assumed that the experience would be enjoyable, but intellectually underwhelming. I could not have made been more wrong. In Persepolis Marjiane Satrapi tells her story of growing up in Iran during The Iranian Revolution. Satrapi uses the visual element of the graphic novel to display how the Iranian Revolution destroyed the country and its citizens (scroll down to watch the video of Satrapi explaining the “possibilities” of the graphic novel and comics). Persepolis defied all my pre-conceived notions about graphic novels by being not only academic, but one of the most profound novels I have ever read. Through her combination of written abilities and artwork, Satrapi proves that the graphic novel is a useful medium to communicate significant political and global issues. I believe that Persepolis exposes the devastation of the Iranian war more effectively than a traditional novel could. 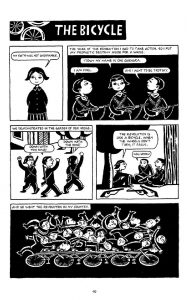 The graphics Satrapi draws in Persepolis are far from childish cartoons; at least half of these graphics display dead bodies, violence, oppression of women, and warfare. Even though the images in the graphics are drawn simplistically and in cartoon-like form they manage to hold their visceral wealth. There is just no way to draw things like dead bodies and bombs obliterating entire cities without powerful connotations associated with them like death and destruction. There are several images of people in her novel being executed, murdered, blown up or otherwise physically harmed throughout the novel. This violence was the reality of the Iranian Revolution, and Satrapi’s simplistic images effectively convey the reality of this war. 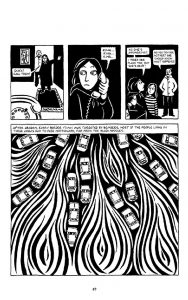 The second quality of Persepolis that makes the novel so powerful is the color scheme; the graphics are entirely in black and white. I think this highlights the emotional and physical suppression women in Iran faced. One of the consistent problems the main character Marji faced throughout the novel was being oppressed due to her gender. Women in Iran during The Revolution were forced to wear a black veil and have ninety percent of their bodies concealed in any public place. There are several parts of the book that show groups of women as large black masses, their faces concealed, and not being seen as individuals. One anonymous WordPress blogger claims Satrapi does this for several reasons, and one of those main reasons is to avoid placing individuality on any one character. These dark images highlight how Marji feels as a woman, and that to be a woman in Iran means to not have the rights to be an individual, or to have a voice. 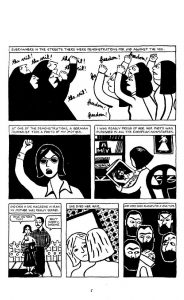 Persepolis is an incredible graphic novel. Despite all of the heavy topics it covers, it is still an incredibly entertaining and enjoyable read. The graphics simultaneously emphasize the horrors of the Iranian Revolution, and bring the sassy Marji to life.