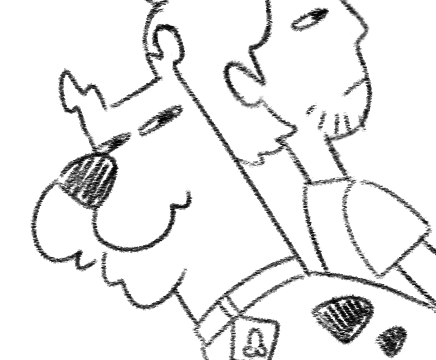 The Internet is a place of many fanworks, with fans from around the world taking the established properties they love and paying tribute to them through fanart, fanfiction, and various other creations. Some of these fanworks take on a life of their own, transcending their tributary origins to become something original. One such fanwork is the webcomic Scoob and Shag, created by illustrator Diego Casasola, known by the pseudonym Dingo online.

Scoob and Shag started in 2014 as an inside joke between Casasola and two of his friends, who would imitate the voices of the iconic characters Shaggy Rogers and Scooby-Doo as they joked about Scooby being rude to Shaggy. Eventually, they made a blog on the website Tumblr to share comics relating to the inside joke, which became more popular than they could’ve ever expected. It wasn’t long, however, before the blog died down, as ultimately the comics were always intended as one-off jokes.

However, in 2016, Casasola had an idea to turn Scoob and Shag from a series of unrelated joke comics to one long, continuous story. As he told Tiger Media Network in a 2019 interview, “At some point, I revived Scoob and Shag with some comics here and there, and thought it would be funny if the comics started having a continuity.” And so, the new Scoob and Shag began, soon growing to a magnitude no one expected, not even Casasola himself. What was ultimately still intended as a joke soon became an ambitious, jaw-dropping action adventure.

Vulgar, violent, and unapologetically weird, Scoob and Shag tells the story of Scooby and Shaggy’s most dramatic adventure yet. On the way, they discover their unearthly origins and are thrust into a long-running, epic war between classic cartoon characters such as Buggs Bunny, Mickey Mouse, and Popeye.

One of the most interesting features of Scoob and Shag is the power system, inspired by the powers system from the classic anime JoJo’s Bizarre Adventure: Ballyhoo. Every cartoon character in the comic has their own Ballyhoo, named after various TV-related terms, based on how beloved they are as a character. The more well-known and loved a character is, the stronger their Ballyhoo is. As one of the most iconic characters in western animation, Scooby’s Ballyhoo is one of the most powerful, making him a force to be reckoned with.

At almost 100 updates and still ongoing, Scoob and Shag has become an incredible property all its own, with almost 200,000 subscribers on Webtoon and overwhelmingly positive reviews. The comic’s extensive fanbase has even spawned many fanworks of their own based on it, with fanart and original characters abound. There are also many dubs and fan-animations on YouTube, with the channel Studio Meraki even creating an original musical OST for their dub.

The success of Scoob and Shag goes to show the potential of fanworks and parodies, paying tribute to them even as it critiques them. Even though the plot’s scale and drama were not intentional from the beginning, the comic has evolved into something truly great. And I encourage you to give it a read if you have the time. (As a note, the comic features graphic violence and gore, body horror, foul language, and depictions of drug use, so tread lightly if those sort of things may bother you.)

2 thoughts on “Scoob and Shag: The Wildest Webcomic You Need to Read”