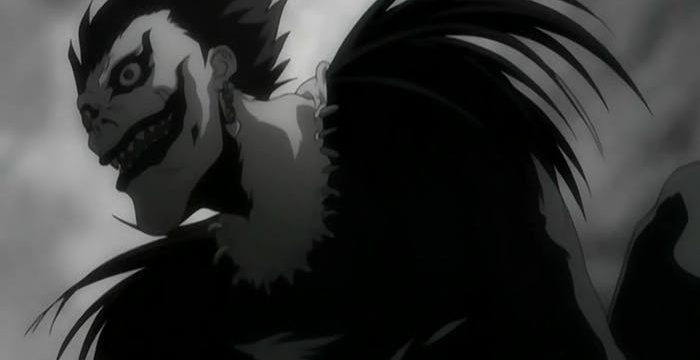 Warning: Contains some spoilers for Death Note, Kuroshitsuji, and Full Moon Wo Sagashite

In manga, Japanese graphic novels, different beliefs of death are depicted. However, one of the most common is the belief in Shinigami, also known as death gods who are often seen involved with death such as collecting the souls of those that are dead, aiding those that are dying, or using the living and dead for their own amusement, often having them kill others. According to mythology.net, Shinigami are part of the Shinto religion and are part of the thousands of kami, gods, in Shinto lore. However, they are a newer appearance in the religion as they only recently came about in the last few centuries because of interaction with Western societies. Based on some of the depictions and the actions in stories of Shinigami, they may have been inspired by the Western Grim Reaper who collects the souls of those that are meant to die. 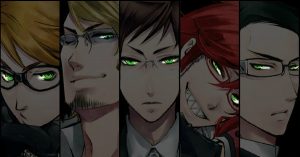 In the manga Kuroshitsuji, Black Butler in English, several of the characters are Shinigami. All of the Shinigami appear human in appearance except for their bright green eyes, as shown in the above picture. This, as well as their glasses and the garden tool weapons are distinctive features that identify them. Towards the beginning of the series when they are first introduced, one of the main Shinigami, Grell (The red head in the picture), is discovered to have been hiding as a butler as he helps Madam Red slaughter prostitutes. The women had come to her to receive abortions and she grew to envy them as she lost her husband and unborn child in a carriage crash that also left her baron. This theme of Shinigami using the living in their plans for entertainment continues further in the manga when it is discovered that the experiments to bring the dead back to life is actually the result of a Shinigami adding additional film to the records of their life. These life records are shown as film strips that depict what occurred from birth to death and by adding additional slides to the roll, the corpses were able to be reanimated; however, they had no purpose in life. Both incidences are stopped by the protagonist of the story, Ciel Phantomhive who is a wealthy thirteen-year-old known as the Queen’s watchdog. He took over the position after his parents were killed and he returned from being kidnapped by an occult group. With the help of his demon butler, Sebastian, who rescued him from the kidnappers, he fights to bring down the criminals that infest England.

While Kuroshitsuji shows several instances of Shinigami abusing their powers, it also depicts the common idea of Shinigami helping the dead move on as the Shinigami in the manga use their weapons, often in the form of gardening tools and equipment such as chainsaws and lawnmowers, to gather the death records and judge the individual. This is often done by slashing the dead like with a scythe in common depictions of the Grim Reaper and making the records shoot out of the individuals body like blood. These records are then viewed and marked down before being gathered into the weapon to take them back to the Shinigami base. 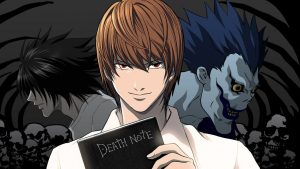 Another manga that involves Shinigami using a tool to collect souls is Death Note. This series continues the idea presented in Kuroshitsuji of Shinigami using the living for their own entertainment. Ryuk, a Shinigami from another world, decides to drop an extra death note in the human world in hopes of breaking his boredom and escaping the desert like world of the death gods. A death note is a notebook that enables the person that writes in it to kill a person with only their name. The Shinigami use it to collect souls and can use it to kill humans early in order to expand their life span by taking the human’s remaining years for their own. The person that writes in the notebook is also able to write a cause of death in it as well; however, if they do not do so within sixty seconds, the victim is killed by having a heart attack. The series follows from Ryuk’s dropping of his death note to when it is picked up by Light, the son of a police officer, who proceeds to use it to kill criminals as he tries to avoid law enforcement and the mysterious investigator L.

This manga also introduces the idea of wings. The Shinigami are able to use their wings to fly around. When not in use, the wings retract. This appears similar to the idea of angels in Christian religion; however, the Shinigami in Death Note appear otherworldly and have a variety of features such as gray skin, burning gold eyes, and sharp teeth that make them look more like demons. This can be seen in the above image with Ryuk who is depicted on the right. His blue coloring, yellow eyes, and twisted mouth give him an evil, demonic look. Ryuk and the other Shinigami are only able to be seen by humans that have come into contact with a death note. 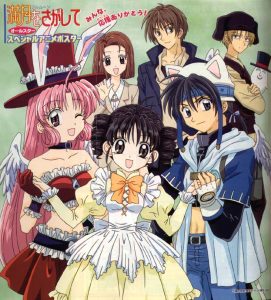 The final manga this article will discuss is Full Moon Wo Sagashite. This series carries on Death Notes idea of Shinigami having wings to fly, but gives them a more human like appearance than in the former. Also, like in Death Note, they are only able to be seen by those that are dead or dying. The Shinigami in the series are suicide victims that are required to collect souls in repentance. One of the Shinigami, Takuto (the boy in the photograph with the cat ears), decides to fulfil the wish of a dying girl, Mitsuki (the black haired girl in the middle), who has a year left to live because of a malignant tumor in her throat. He allows her to age up into a sixteen-year-old girl who is healthy, allowing her to audition and become a singer without worrying about her voice. The series continues from this point as it follows Mitsuki, Takuto, and several other Shinigami as Mitsuki lives her dream before she has to die and Takuto starts to gain memories from his human life.

All three of these mangas as well as several others carry the common theme of Shinigami being supernatural beings that gather the souls of the dead and dying. They differ in whether the Shinigami decides to aid humans with their powers or abuse them. Also, while many may have a tool that aids them in collecting the souls of the dead, not all of them do. While Shinigami may be a common character in manga involving death and supernatural elements, not all of them agree on whether the Shinigami should use their powers to aid others, to entertain and better themselves, or to simply follow the job protocol of gathering souls.