We’ve heard of the anti-hero trope before with examples like Rorschach from Watchmen and the characters discussed in this blog from tlanier, however, where is the line between anti-hero and villain? One of the main traits when defining an anti-hero is the existence of good intentions at least somewhere. With Rorschach, we see his commitment to solving the murder of the Comedian as well as the means he will go to seek justice, albeit through brutish, unconventional, and illegal methods. The Boys, by Garth Ennis and Darick Robertson, has similar themes and tones to Watchmen in which it explores the dark, grimy side of superheroes and vigilantes, however, it introduces the downright villainous behavior of these “heroes” which is apparent right away, in both the comic and the tv show.

Within the first few pages, one of the main characters, Wee Hughie, is spending a romantic day in the 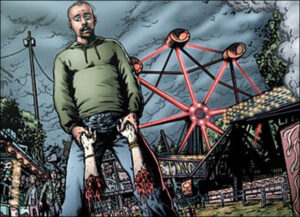 park with his girlfriend when she is brutally torn apart by a superhero running at top speeds. This is where the age-old question begins that we see in many superhero stories: Do the ends justify the means? This comic explores the depths of power-hungry egomaniacs and introduces, not just anti-heroes, but villainous superheroes.

In this panel, we see the utter despair from Wee Hughie as he goes into shock, still holding the severed arms of his girlfriend, juxtaposed with the 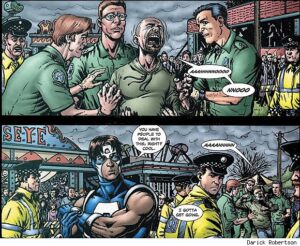 apathetic “hero” underneath that killed her. A-Train, who can run at super-high-speeds, is seen asking an officer “You have people to deal with this right? Cool. I gotta get going.” The complete lack of remorse is the tip of the iceberg when compared to more of the horrors unleashed in The Boys, however, I think that’s what makes it such an intriguing read and an interesting show to watch on Amazon.

Stormfront, unlike A-Train, is introduced to the comics immediately as a villain. However, the Stormfront we meet in the Amazon original show is charismatic and likable at first and is even gender-swapped from the comics. We meet Stormfront, played by Aya Cash, as an outspoken feminist who appears to put some fear into the egomaniacal Homelander, and even have hope that she will better the Seven. This is what Eric Kripke, showrunner of “The 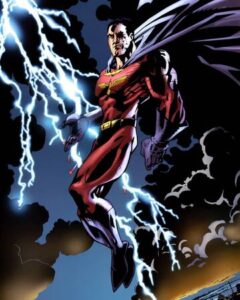 Boys,” wanted the audience to feel before it is revealed in later episodes that Stormfront is a racist nazi that grew up in the Third Reich. Here is a brief interview of Kripke discussing some of the artistic choices made with the intentional gender swap, as well as Cash’s initial feelings towards the character. I believe this is where The Boys diverts from Watchmen and other depictions of anti-heroes in which Garth Ennis has created a supervillain who has managed to brand themselves as a hero. There is no code of morality with Stormfront, who is antisemitic, racist, and incredibly violent toward anyone not of “Aryan descent.” The name Stormfront derives from a hate-based, neo-Nazi internet site that was launched in 1996 under the same name.

Though the aforementioned A-Train and Stormfront are not the same degree of evil, there is a clear theme between the two, abuse of power. I think exploring this theme is what makes dark comics like this so interesting, because it muddies the lines between good and evil, which, to me, is more realistic.