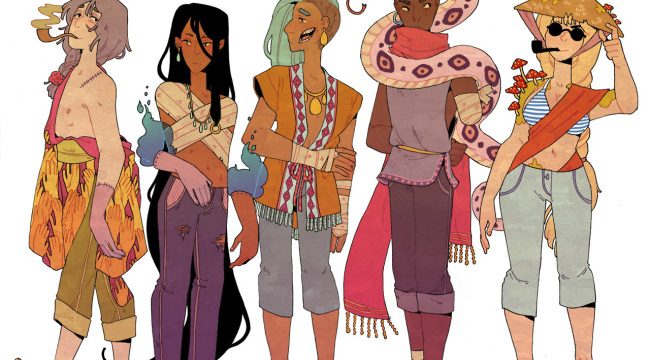 If you’ve heard the phrase “Original character, pls don’t steal,” you know what I’m talking about.

The internet is quick to judge kids who make characters to fit into their favorite franchises. Sure, many of these characters might be wildly recolored replicas of characters that already exist within the canon universe, or they might be poorly disguised self-insert versions of their creator as a way to vicariously live the experience offered by the world the character is born into.

Actually, creating characters and fan fiction are a popular response to being interested in a franchise. kcervant wrote this week about Fanfiction and the Great Appeal giving a definition to the term “fan fiction.” In a way, fan fiction is a way for the fandom of a certain thing–– be it a comic series, a movie, a game, anything with a canonical story–– to take a piece of that story and make it their own. Many fanfic writers like to imagine what happens after a story ends, or imagine the outcome if something about the canonical story had happened differently. In some cases, authors will take the characters in a franchise and experiment with what would happen to them if the characters were in a different scenario or universe. Authors have free reign over the circumstances. After all, they’re taking part in expanding the narrative of the already existing work. Sure, none of their fanfics are canonical, and in the end, any fiction they make up regarding the story holds no meaning in the scheme of the franchise. Fan fiction is purely for the enjoyment of fans.

Sometimes, instead of using characters already existing inside a canonical universe, fans will make their own characters and develop their experience in that universe. A common example of this is when fans make their own Harry Potter fan characters, who go to Hogwarts, and are sorted into their own houses, and live as wizards. Or an author would really like to make a character that fits into the Marvel universe, so they make up their own superhero. Fan characters might live alongside canon characters and have the chance to interact with them via fan fiction adaptations of the universe. Through this fan fiction, authors get the chance to develop backstory for their original characters, and really focus on their personality and tendencies as characters.

Later down the road, when authors revisit their original characters, they might decide “oh, this thing about my character is wayyyy too cliché; I should change it,” or “maybe something else actually happened to them to make them the way they are,” or “I really like this character! Maybe I’ll build my own story around them.” Characters develop from being tied to a specific franchise universe to being standalone characters with an original story.

Of course, original characters don’t have to originate from fan fiction. All the time, authors and artists create original characters just for the sake of creating a story. The point of this article is to bring light to the fact that even while something might not seem important at first–– someone’s character is a cliché Mary/Gary Sue like thousands of others, and their creator likes them that way–– they can grow into something completely different over the course of a few years, bringing with them new stories and new fiction to continue building the genre. After all, stories would be pretty boring if they had no characters.