To be honest, I am just starting my comic journey. I’ve read comics such as Garfield, Calvin and Hobbes, and Spiderman. I’ve seen the majority of the Marvel movies and DC Comic movies, but haven’t actually read many graphic novels. So, I still feel I am a newbie that has lots to learn.

However, one thing I did read when I was kid, was manga. I also watched a lot of the mainstream anime and now watch a little bit more that is not mainstream. I was into Pokemon, Yugioh, Dragon Ball Z, One Piece, Bleach, Sailor Moon, and Naruto. What did all these have in common besides both being manga and anime? They all taught me some valuable lessons about life.

For this blog post, I was originally going to go through all the manga/anime and say how each of these have impacted my life, but I’d like to focus on one that really stood out to me and is still my personal favorite; Naruto.

I remember when I was a kid, I read all the Naruto manga and as I got older I read Naruto Shippuden. I also saw the anime as well and loved both. When I first saw the promotions for Naruto, I thought it would be some silly-stupid thing that would not be worth my time. Boy was I wrong! Naruto really impacted my life in a lot of ways, to the point I made a nerdy circle of friends who all liked it. We would also quote references and knew everything about the ninja world.

Besides having a great story with amazing characters who develop throughout the ploy, the main thing I loved about Naruto, is it taught me to never give up. I feel I could relate to Naruto, because when I was little, I had severe learning disabilities and a lot of people including my teachers, thought that I couldn’t learn and advance in my learning. However, I tried super hard and now I do well in school. I made my weaknesses my strengths like Naruto did. A lot of people thought he wasn’t worth anything and was stupid, but he proved them wrong and became a better ninja through his hard work/determination. 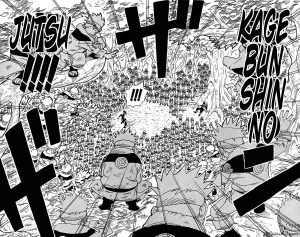 For example, this part of the manga represents when Naruto learned the multi shadow clone jutsu. It’s a ninja technique where you can make tons of clones of yourself and use this to your advantage in battle. During Naruto’s ninja academy days, this was his worst jutsu and he could never master it. However, he studied hard to learn this technique and now it’s one of his signature moves, this move is what let Naruto become a ninja and pass his exam. It just goes to show, that you can turn your weaknesses into your strengths.

This just goes to show and this is the major part of my blog post: that even a comic can teach you some valuable life lessons. Before I took this class, I never realized that a manga was a comic and thought comics were superficial. But that’s not the case; I’ve had a change of heart because I realize that they can teach me as much as a good book can and always have a message.

I hope to take this with me as I grow on my graphic novel journey.

This link includes a Naruto quote on never giving up:

12 Anime Quotes That Taught Us To NEVER LOSE HOPE

10 Things The Naruto Series Taught Me