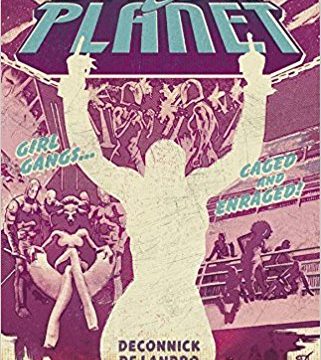 Bitch Planet is a comic created by Kelly Sue DeConnick and Valentine De Landro that follows the lives of female prisoners in a futuristic dystopia of sexism and oppression taken to the extreme. The ads within it parody 1950’s style, satirizing modern day sexism and reflecting the values and norms of the Bitch Planet universe with hilarious and depressing results.

An ad for New brand douche comes right out and says what real ads only hint at: “Your vagina is disgusting”. By blatantly stating this, the ad calls attention to the more subtle but still sexist undertones of actual ads for an unnecessary product that feeds on the bodily insecurity of women.

A missed connection on another page of ads says:

ME: At the pool outside DESTINATIONS LOUNGE last Thursday night. I was wearing khakis, solid earning                 potential, a sparkling smile and a sincere desire for meaningful emotional connection beyond the usual small talk.

If you’ve ever seen pictures of dating app conversations or this blog, you know this missed connection is barely even satire. It emphasizes the objectification of women and calls to mind the not uncommon phenomenon of having well rounded, fleshed out male characters while female characters are reduced to bland embodiments of current beauty standards.

The ads of Bitch Planet take messages that just about every woman has heard in some form or another and turn them up to 11. They caricature the everyday sexism and misogyny of modern society, and they do it well.