In the past few years, we’ve seen a huge surge in popularity towards the comic book universes, particularly where Marvel and DC are concerned (sometimes it’s easy to forget there are others, it’s just that those two are big, loud and rich). Of course, these comics have always held a strong cult following, and are celebrated regularly at conventions, trade shows– you name it. One of the biggest reasons for their more recent surge into the limelight would be due to the numerous adaptations of their more well known and popular stories that have been made. People love to love, and hate, those adaptations, and it’s brought those stories back into the light and connected those comics to an audience that perhaps previously didn’t think much of their existence. The Marvel Universe has been churning out movie after sequel after adaptation, and three spidermans later, you’d be hard pressed to find anyone who hasn’t seen a Marvel movie in the last few years. DC has also been catching up, bringing back a small plethora of Supermans, plus the occasional Batman and of course, Wonder Woman as it’s most recent crown jewel.

Besides the movies, however, there is another form of adaptation that I believe to be frequently overlooked, which captures not just the big overarching comics that everyone is more than familiar with, but some of the smaller series that are more well hidden from public view. Video game adaptations are usually pretty interesting, and there are dozens of them in all different styles if you look. I’ve found one of the most successful companies in this venture is Telltale Games. They have done a number of games series in their episodic game style, both adapted from other video games and TV shows. What I’d like to talk about here, however, is their adaptations of comics into detailed games. They’ve used a number of well known comics in their work– Guardians of the Galaxy, Batman, and even The Walking Dead. The one I’d like to talk about, however, is a comic series I never would have discovered if it weren’t for Telltale– Fables, a rather extensive series by DC that was adapted into the game, “The Wolf Among Us.” 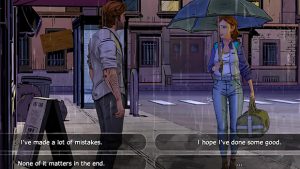 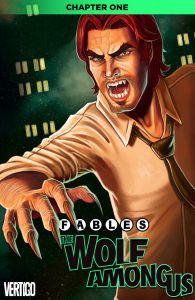 Telltale Games is known for their choose-your-own-path, every action has a consequence type style, and the visuals keep to a really beautiful kind of comic-style art. That was part of what drew me to the Wolf Among Us in the first place, along with it being one of three games on Steam that are actually available on Mac products. The game itself is pretty gorey, and it has a good bit of agency within the ability of the main character to move around, investigate and both to find and miss important factors. The game series takes a departure from the plot of the Fables series, although the characters remain the same, and there is a webcomic that was both announced and published in 2014, and that came to a close in 2015. 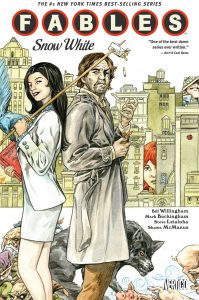 I, like many of the people I know, didn’t really know much about comics outside of the giant movie franchises, so for me this game became an important step into foreign territory. After playing the game, which ends on a cliffhanger, I was urged by someone who’d also played the game to check out the series it was based on. As a result, I blew all of my money on ripping through the series, and it opened up a whole new world of stories and styles I never knew existed. Those video game adaptations created a connection for me into lesser-known series that I never would have known existed, and I plan on continuing to scour Steam for more of those stylized adaptations in the future.

5 thoughts on “Tripping over Adaptations of the DC Universe”