In the autumn of 2016 I took a trip to Atlanta, Georgia with a friend to go to Dragon Con.  Dragon Con, for those who do not know, is a conglomeration of everything that society considers “nerdy.”  There are video games, card games, board games, miniatures games, panels and photo ops with the creators of nerd stuff, etc. Oh, and of course there are comics.  It is held in a myriad of connected (and some disconnected) hotels in the city and in those hotels there are bars.  That is where our story begins. 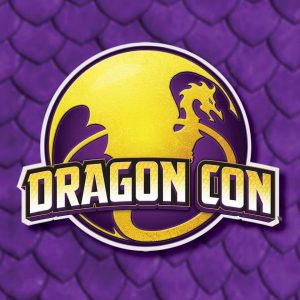 On the second day of the convention, my buddy and I ended up at one of the hotel bars in the late afternoon during their happy hour.  We had one too many before we realized, but that wouldn’t stop us from enjoying the convention; if anything, I think we enjoyed it more after several drinks.  He had suggested that we make our way to the vendor hall for “one last look before it closes for the day.”  I agreed and off we went.

Side note: because everything was connected or within walking distance, we did not drink and drive for those of you who are wondering.  Stay safe out there! 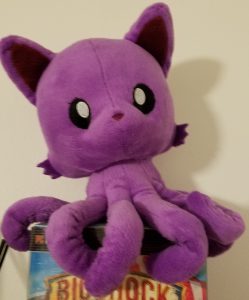 My friend and I made it through most of the vendor hall without much mishap and only buying a couple of things that we probably would not have if we were sober.  See the picture of my Tentakitty, Lil’ Purps, for reference.  Then we reached the “Artist Corner” where several individuals and smaller companies were pitching their work and that is where I spent $5.00 on one of the worst comics I have ever laid my hands on, The Samurnauts.

The Samurnauts is a comic from Unshaven Comics.  The guy pitching the comic to me was beyond enthusiastic; he came out from his booth and with a copy in his hand and just started talking at me, saying things like, “It’s so thrilling!” and “Who doesn’t want to read about a team of samurai super heroes led by a monkey?”  Well, in my state of mind at the time, I really wanted to read about the samurai and their monkey leader.  I was head over heels about the idea of this comic and I could not get my shiny five dollar bill out of my wallet quickly enough to throw at this guy.  Meanwhile, my buddy is standing a bit behind me just laughing at the encounter.

So I gave the guy the money, he and the two other authors/artists signed it for me and I walked away with the biggest, most stupid grin on my face.

So What About the Comic?

It was awful. Just. Awful.

Why Was It So Awful? 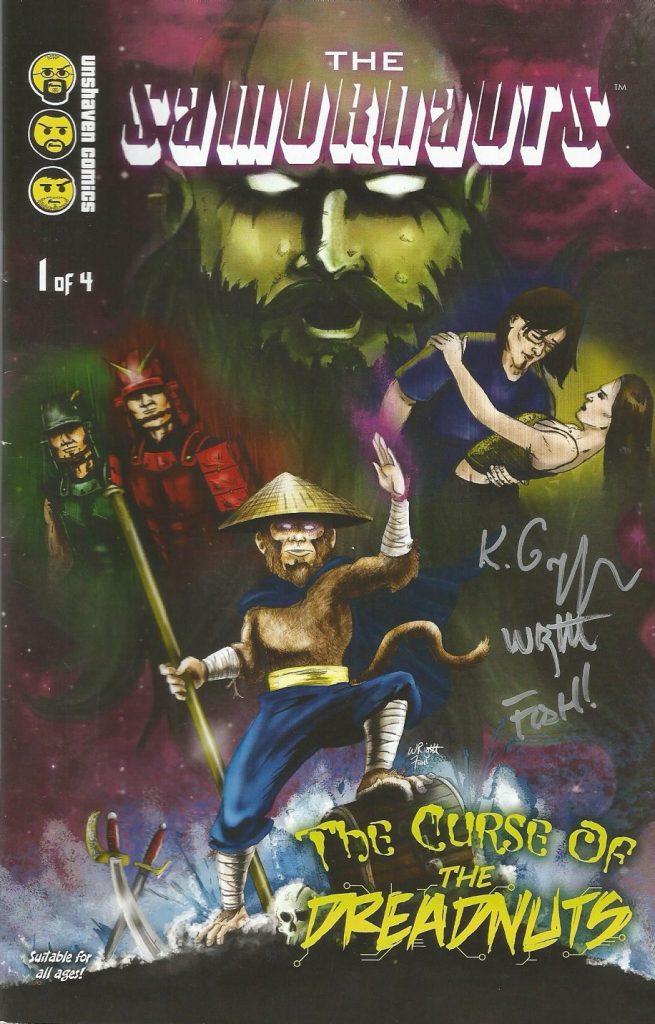 Firstly, look at this cover .  There is far too many things happening.  If I did not receive the pitch I would have no idea what this comic was about. I would think this comic was about a monkey looking for treasure while too people fell in love and there was some sort of bearded space villain with some samurai henchmen.

Let us move on to the title of both the comic as a whole and of this issue specifically.  The name of this comic is The Samurnauts. The name is comical and a little goofy, it sounds like a really bad kids show that becomes far too popular and no one knows why.  I label this as a negative trait of the comic because it takes itself completely seriously.  Nothing about this comic is a joke, but I will get more into the content in a moment.

The issue is titled “The Curse of the Dreadnuts.” Again, this is a goofy title and even seems like a play on the main title which, without context, leads me to believe that this comic is supposed to be funny or maybe satirical to other action comics.  It is not.  Every page and every plot point is serious or at least takes itself seriously.

Now let us move into the contents of this comic.  The overarching narrative of this issue is the conflict between the Samurnauts and the Dreadnuts.  So, super powered samurai against zombie pirates.  The comic opens in the middle of a fight scene with no context, the Samurnauts start losing against one Dreadnut, then the monkey saves them just in time. End scene.  There is no real progression of characters and the reader is introduced to the Samurnauts as these weak and pathetic squad of do-gooders who need to be saved by a monkey that knows martial arts.  This is not a good way to introduce the “heroes” of a story when there is no background of why they may be losing this particular fight.

The following scene is an emotional roller-coaster between the red Samurnaut and his girlfriend.  She basically pulls an Iron Man and says the Samurnauts need government regulations for their actions.  This flashes over to the purple Samurnaut quitting the team because all of the master’s training resulted in nothing but a joke (I think this is the only “joke” in the comic).

Flash to the last scene with the Samurnauts raiding a zombie pirate ship, losing another fight, the monkey blows up the ship.  End of comic.

So the title characters of the comic lose every fight they go into and the monkey has to help them or they will die.  Why is this comic called The Samurnauts again?

Next up on the chopping block is the art style of the book.  Sorry, I should say art styles because it is illustrated by three separate people.  The art is not bad.  I in fact like the art in the flashback (pictured second below), but the constant swapping of the art made me lose my immersion even more than the story.  Some of the art seems unfinished and sloppy (see first picture below, middle panel) and some does not.  There is little to no consistency and I feel like it loses the reader more than it draws them in.  If I was shown the below images out of context, I would have assumed that they were from different comics entirely, or at least different issues.  Below are the three different art styles featured in the comic for your reference. 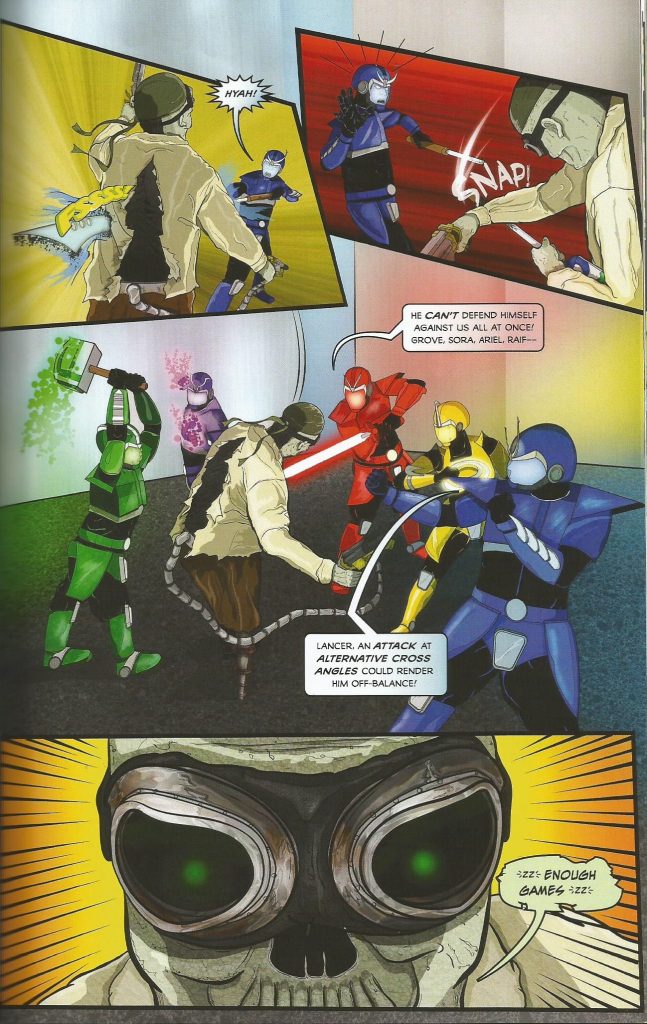 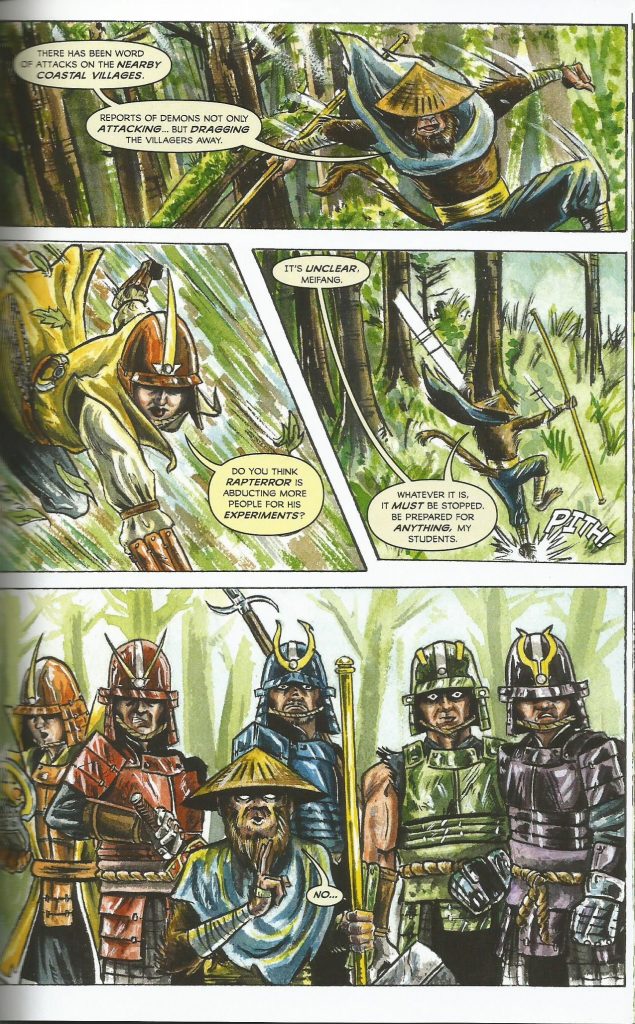 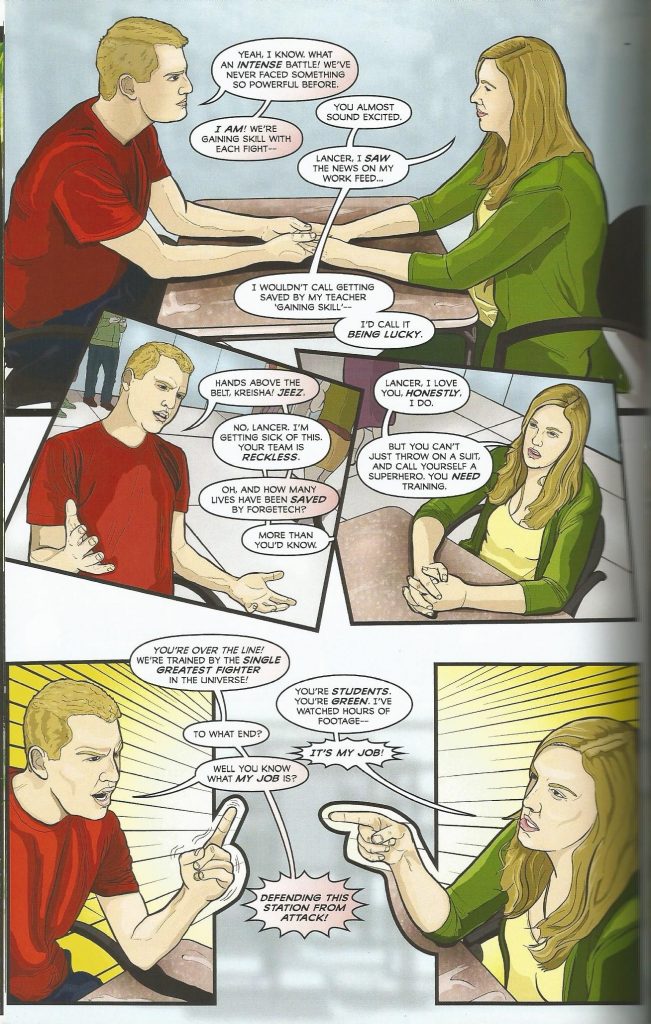 This review has a few reasons behind it.  Firstly, The Samurnauts is not a comic I would recommend to anyone, not even an avid Power Rangers or Teenage Mutant Ninja Turtles fan which I believe they were very much imitating.  Secondly, alcohol changes the way we think, so maybe avoid going to a place that tries to sell you things; something that sounds really exciting to drunk you probably will not be nearly as cool to sober you.  Lastly, always, always, ALWAYS look inside of a comic before you buy it because if you do not like the art, you probably will not enjoy the comic, drunk or otherwise.

2 thoughts on “What Happens When You’re Drunk at a Nerd Convention?”