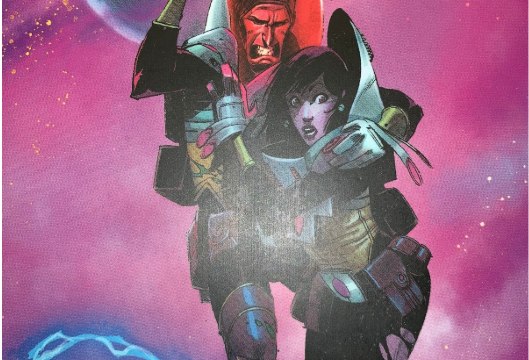 “Black Science Volume 1: How to Fall Forever” by Rick Remender tells the story of Grant McKay and his misfit crew who have just finished building the pillar, a device that makes it possible to jump through different dimensions, only to find out that it’s been sabotaged. Grant, his crew, and two children are stuck falling through different dimensions of Earth, and whilst this may seem like their biggest dilemma, a lot is coming out about their personal lives that should have remained buried.

Grant refers to the pillar as a tool for his construct of The Onion, which is his “theory that anything you can imagine exists in some layer of the Eververse” and the term onion comes from the “layer upon layer of parallel dimensions” (Remender). He explains how the pillar infiltrates these layers “allowing us to travel to these other worlds. Each layer represents an immeasurable number of realities,” and what interests me most about these dimensions is how they’re depicted via color schemes and species, specifically within the first two dimensions they visit (Remender).

Matteo Scalera worked on the sketches and lines whilst Dean White contributed textures and color palettes. To the left is a picture from comic three within volume one that depicts the original dimension. Grant’s entire operation takes place within the tall building in the middle of the panel. This world features a normal palette and no out of the ordinary features, showing how the main characters simply come from a city in America.

Upon entering the first dimension they stumble upon we’re met with heavily saturated colors from a cool-tone color palette. The above ground species have a more Earth-tone look to them whilst the below ground species are shades of blue. Above ground has a hoard of enormous turtles that each carry a village on their back, and each village is comprised of humanoid fish. The genders of the fish are easily discernible by exaggerated proportions for females and traditional male-like statures for the men. Below ground are humanoid frogs who appear to be male but there is no distinct qualities between them. Something interesting from this dimension is how traditionally water based creatures are now above ground and land based creatures are below ground. The above ground’s main structure looks similar to that of the Aztec Empire whilst below ground has a more round table castle feel to it with the frogs wearing fur and jewelry making it comparable to older European society. Of note is that both cultures are at war with each other in this dimension.

The only way to describe the second dimension they enter is futuristic Native Americans fighting Germany. The Germans are wearing olden uniforms, using rifles with bayonets, and trench warfare giving them a World War One feel, meanwhile the Native Americans are using horses and shamans for healing, but possess very advanced technology, such as massive flying Warbirds, depicted above. Their battle armor consists of the traditional feathers but it’s futuristic in the sense that it’s a Native American Iron Man suit. In this dimension everyone is human and Germans are fighting for their lives as the Native Americans attack them on their territory in this unexpected role reversal. The color palette is mainly Earth tones in the background and we see a lot of flashes from bombs that add a unique layer of showing the reader different elements of the panel without taking away from the color scheme.

There are two other dimensions they visit towards the end of volume one that feature new species along with the introduction of versions of the main characters from different dimensions and parallel universes.  Whilst the “Black Science” series has been out for almost six years and is now on its ninth released graphic novel, it’s yet to hit the mainstream. They’ve now published a remastered version that’s a compilation of the first three novels with unseen sketches and a new cover and I’m sure that Remender, Scalera, and White will not disappoint.

2 thoughts on “Forever Falling into Worlds of Color”