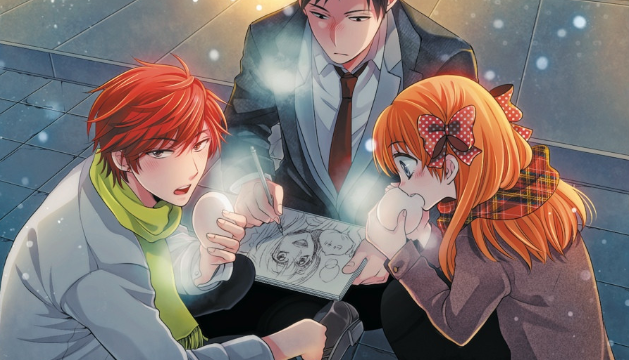 Manga gets meta on itself all the time. It’s practically a tradition for every series to break the fourth wall or mess with its typical tropes at some point in its run, whether in the actual story, in side panels, or in bonus, non-canon stories. So, what happens when the story goes out of its way to do that nearly every page? You get something like Gekkan Shoujo Nozaki-kun or Monthl Girls’ Nozaki-kun.

This manga is told in four-panel strips called 4-koma, beginning by focusing on Chiyo Sakura’s crush on her classmate Nozaki, who she discovers (upon failing to confess her feelings to him) is actually a very famous shoujo manga artist. He’s a guy who draws manga for girls and quite successfully, having created a series that Sakura has actually read a lot of. The disconnect between his personality, his gender, and his physical appearance make for the first bit of meta commentary on shoujo manga. The idea that it’s very strange for a high school guy to be writing heartfelt romance is played up throughout the series, always lingering in the background to become a joke when all else fails.

As other characters get introduced to the story, the chaos escalates, each one fighting to see who can subvert typical shoujo manga tropes more. The best part is that some of them seem aware they’re doing it too, but they still can’t stop. One example of this is with Mikoshiba (Mikorin), the stereotypical cool-guy that all the girls fall for and a close friend of Sakura and Nozaki. He only pretends to be confident and flirty because that’s what’s expected of him. In reality, he’s actually very shy and easily embarrassed, but his friends always make him deal with the messes he gets himself into. Another example is Yuzuki, Sakura’s best friend. She’s manly, oblivious, has absolutely no tact, and sings like an angel, something that gets played up when another character falls for her singing voice, not knowing who is attached to it. There are a few more characters in the main cast, each with their own set of tropes to subvert, and they sure do just that. A lot.

While largely a gag series, Monthly Girls’ Nozaki-kun is actually full of useful information for anyone who might consider becoming a manga artist. There are pages with descriptions of terms used in manga drawing and step by step instructions on how to draw certain things. Nozaki might be a dunce in the real world, but he certainly knows a thing or two about manga, and he’s more than willing to share it with his friends, all of whom have a  roll in helping him create his art, though not all by choice.

Beneath all the meta gags, fourth wall breaking, and trope weirdness, there’s a lot of heart in this series. Having started publishing in 2011, it’s 10 volumes, one drama CD, and a 12-episode anime strong, with the manga ongoing. If you’re looking for something lighthearted and funny, you enjoy when the hyper-cliched stereotypes of a love story are turned on their heads, or you really just want some advice on drawing, Monthly Girls’ Nozaki-kun has got all you could ask for. Just don’t expect Nozaki to ever get a clue. Seriously, how dense can a main character be?