How technology’s strong influence affects the world around it

Released in 2008, the Sardine in Outer Space series by Emmanuel Guibert let out its sixth volume continuing the adventures of the well known group. It centers around a short and feisty girl named Sardine, her best friend Little Louie, and uncle, Uncle Yellow. As the three of them travel outer space, they encounter their arch nemesis, Supermuscleman, whose main goal in life is to get rid of Sardine and her found family.

The volumes usually consist of a group of short stories that feature one adventure the group goes on. Capped at about ten pages, each volume typically has nine or so adventures in them. The first one in volume six is titled “Umby the Cell Phone” which centers around Sardine and Little Louie’s new cell phone named Umby. The whole joke is that going through the stages of a real human, Umby is born from a litter and grows up as time goes on. When he is “fully grown” he turns out to be borderline evil and makes fun of the two kids while ruining Yellow’s television.

It’s pretty obvious where the writer stands on the endless debate of “technology: good vs. evil,” and they make it very clear with this short story. For starters they made Umby a horribly mean character. He is often seen calling Sardine and Little Louie, “Fishface” and “Little Looloo”. He then goes and bugs Uncle Yellow, slamming into the TV saying “TV makes you dumb! Shut it off!” The obvious negative behaviors of Umby is supposed to make readers feel turned off by him. Since he is a cell phone, readers are to assume that all phones are bad which is a lesson they carry on into their day to day life.

There are a few technical factors that also make this message a little more important. First, this comic is advertised and written for children. And when it comes to children, they often take what they read from the media as law (since they don’t have too much outside opinion and experience). That is why children’s media is so heavily monitored. By having a story like this, it affects the younger generations to think a certain way about technology in a way they can understand. On the surface it looks just like a fun harmless comic, but deeper down it’s a message about evil government robots. Another thing is the placement of the story itself. By having this story be the first thing that readers see, it essentially sets the tone for the rest of the book. It also is one of the things that readers remember (that and the ending of course). So essentially, the writers wanted the readers to remember what they said about technology and then take that opinion with them for the rest of the adventures. Which it does, and you can read the whole thing here!

In the end, there will always be the argument of “Is technology actually helping us? Or is it just another government ploy?” Emmanuel Guibert just decided to be vocal about his answer. 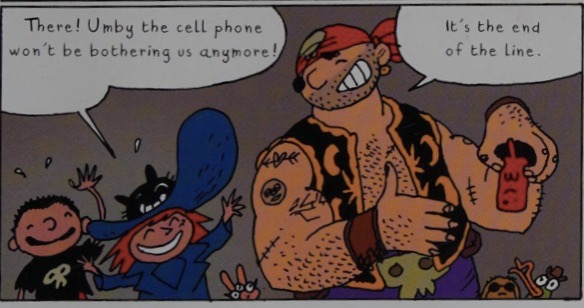