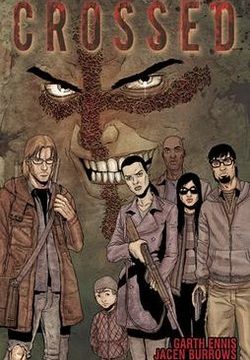 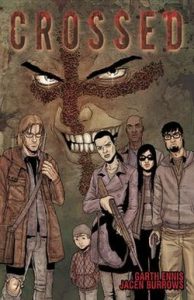 You have to say to yourself sometimes while consuming content: there’s no way they would go there. Right?

Well, Crossed goes there. I read some of these comics quite a few years ago and needless to say they made me physically ill, not because of the gore, but the other contents going along with it. Though, even this amount of gore was a little too much for me to handle. As I continue with this post, please heed the warnings, as Crossed does not hold back.

Crossed is an apocalypse story about infected human beings developing a cross rash symbol on their faces, and becoming infected makes the human carry out their most evil thoughts. It is a typical zombie story with the awful twist that the infected are intelligent thus knowing how to use weapons and how to actively spread their own virus.

If the warnings I gave at the beginning were read, we’d have to sit and think; what is going too far? Comics like Crossed can usually be waved off as shock factor, someone just trying to get a rise out of people for fun. But the author Garth Ennis isn’t just a throw away writer and artist, no Ennis has worked for big comic book industries such as DC comics. 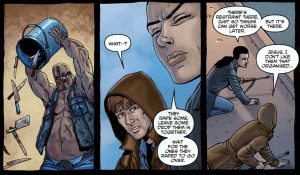 The gruesome nature of these comics has to make you wonder; what’s the limit? Comics have to have a limit to what they can include for shock factor. There is a difference between being edgy for the sake of, literally I do not mean this as a joke ever, triggering people and shock factor at this point. Crossed crosses a line in comics that shouldn’t be crossed in my opinion. In fact, it shouldn’t go near this line at all.

As a survivor, my opinion really says the line is at including rape but I know, sadly, that will never stop. It’s the incest, child murder, pedophilia, and necrophilia that seems to cross the line for anyone with empathy. Especially considering there is literally a scene where the child’s parents are being raped while watching their child get torn in half, blood and gore included in striking detail!

The point is society may be desensitized to some things, but there has to be a limit. 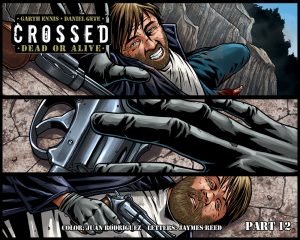 Anyone can argue that this comic is in the middle of an apocalypse so of course bad things are going to happen. You can also argue that it is human curiosity to explore dark subjects but at the same time no human being needs to explore certain ideas. It leads to depravity and opening subject to subhuman monsters who feed off certain things such as pedophilia. It is enabling.

To bring it to a simple conclusion, comics can push the wrong boundaries. Media can go too far for consumption and Crossed shows just how far is way, way too far.