I’ve got one more year of my college career in front of me. That’s one more year of classes to finish up my degree, but also one year’s worth of a head start on filling up my portfolio with my own creative works. When I start searching for jobs, I’d like to hit the ground running with a few things: my own website, an open portfolio of work, and a blog dedicated to pieces on video games. Those items are the foundation, at least, but the Graphic Novel class has me considering some other things, especially with the work we’ve been doing on webcomics. My thought is, why not make my own? 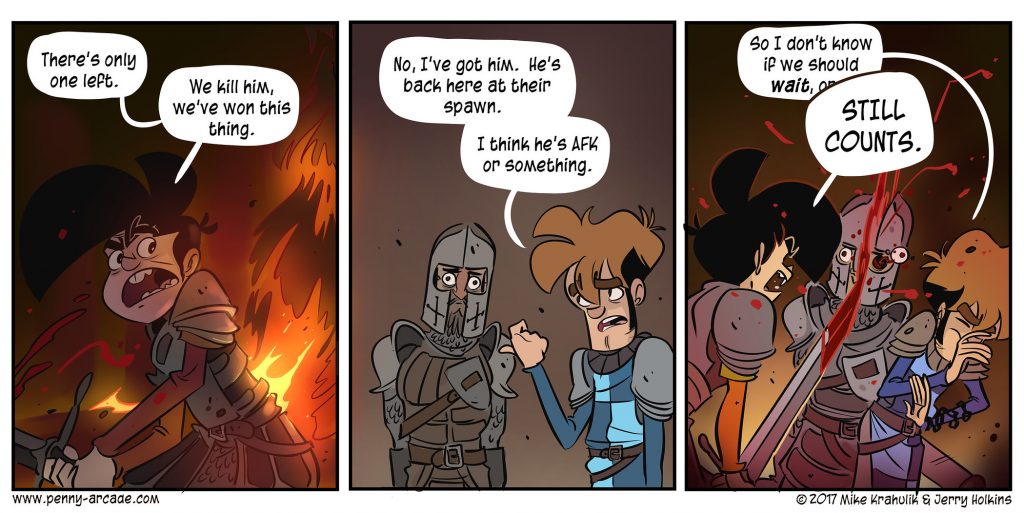 Working with my group on Boogey Girl has been tremendous fun. There have been a few hiccups along the way, but the project has shown me that the barrier to entry for making one’s own series is somewhat low. My previous baseline for the medium, the minimum quality your work would have to achieve to dream of being successful and popular, was Penny Arcade, specifically over the past eight years. With Jerry Holkins as the writer, and Mike Krahulik as the illustrator, Penny Arcade grew from a webcomic about video games into a charity, a gaming convention, and a website garnering millions of views a week. The organization and its products possess a great deal of polish, and I figured that level of talent and professionalism was what one needed to put something up and have any hopes of it gaining traction. After some digging around and finding new webcomics to read, alongside making my own, I can see I’ve set my standards incredibly high, and perhaps I should start out smaller.

Writing is my passion, something I’ve been working on for years, but art is something that’s eluded me. I drew and painted a lot in high school, but I was never that good. I did the work for myself, for personal self expression, but I didn’t regard it as something worth sharing with those around me. I didn’t see much fine art quality in it, and I still don’t, but maybe that doesn’t matter. Alex Norris publishes a series titled Webcomic Name featuring a simple art style of blob characters with a consistent color palette and upload schedule. Maybe there’s some deceptively difficult aspect of the work that I’m not seeing, but I think I could do something on this level, perhaps. I’m taking a digital art class at the moment, and I’ve learned how to use Adobe Photoshop and Illustrator in it; I’ve read several papers and book sections highlighted by professor Whalen regarding comic theory, metapictures, lettering, and panel structure; I also know how to build my own website, creating a page themed around the work it’s showcasing; other than time, I think I have all of the tools I need to start experimenting with my own three or six panels every week, and I know I’ll have more of that once school gets out. During my final year here, I’ll have a lot of free time on my hands, and I think diversifying my creative output would be a great choice for my own development, both personal and professional. I also see it as a means of consistent practice for my own art style, whatever that may turn out to be. If you go to the first entries for Penny Arcade, you’ll see that Krahulik’s style has vastly improved over the many years, and I’d love to share that progression with others alongside the jokes my friends and I come up with.