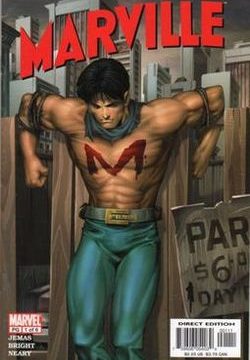 In 2002, Bill Jemas, the president of Marvel at the time, and Peter David, one of Marvel’s head writers, made a bet. Both men were going to write a small comic series and then would let the public decide which was better. Peter wrote Captain Marvel, which lasted for 25 issues. Jemas wrote Marville, which lasted for seven.

Part of the reason for this might be because Marville is experimental, and I don’t mean in an interesting way. What starts as a parody, with the main character Kal-AOL, son of Ted Turner, is sent into the past to save him from the world ending, concludes with Kal time traveling even further into the past and talking with God about the origins of the universe.

The comic where Kal and his friends meet God is even more interesting because it doesn’t contain any speech bubbles. 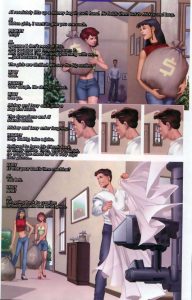 Don’t worry if you can’t read it. This is still the series with a main character called Kal-AOL.

Change is often encouraged for any artistic medium. Video games often push for innovation, and movies that get stale tend to die quickly. If everyone simply stuck with what worked once, the world would be a boring place.

However, not all change is good. Sometimes fundamentals are fundamental for a reason. A submarine should not be made of fudge, and removing the word balloons from a comic does not make it any better. Bill Jemas apparently learned that quickly, since this is the only issue that has this style of writing.

Upending traditions and trying something new is commendable, but in Marville, the sudden lack of a staple of comics just leaves the reader confused. It blocks the art, it can sometimes get confusing when people are talking, and it just all-around ruins the comic.

But, if you think this looks interesting, check it out for yourself here.