I have been absolutely itching to read Fun Home, but don’t want to spoil it before we start talking about it in class. That being said, it got me wondering about other instances where graphic novels and comics end up on the stage.

It is no secret how successful the theatrical adaptation of Fun Home has been. It was on Broadway for over a year and closed in September 2016. Since it’s closing, we are still hearing about it’s theatrical excellence as it now plays all across the country on its National Tour.

I decided to head over to the handy dandy World Wide Web and see other examples, and instead found an article (linked HERE) about a graphic novel that was written about a play instead of from page to play, like we see in Fun Home. Robert Lepage, a playwright and director, wrote a play called The Blue Dragon. When it was time to release the script, he decided to release it as a graphic novel rather than a plain script.

As someone who has theatre as one of their majors, reading plays can be a bore. Very few plays have ever really impacted me just by reading them- you usually have to see them to understand their impact. Kelly Nestruck, the author of the article, said, “While I’m usually content to pick up a play’s text when I can’t see a production on stage, reading plays for pleasure can be a frustratingly incomplete experience. Plays aren’t, after all, written to be read.” This is exactly how I feel.

You learn very early on in theatrical studies that catharsis, or feeling something, can be most often brought upon by faces. When you read novels or books, you picture what the characters look like to you, whether it’s a conscious thought or not. You also learn very early on when studying theatre that plays are meant to be seen, not read. Hamlet will never be as powerful when you’re reading it from a script than it will be when you see a great actor preform the ever-so-famous “To be, or not to be” speech.

So then why has no one thought of this before? To include pictures in scripts? I, for one, think Lepage is a genius for discovering that and would be eager to read The Blue Dragon.

One thing I am weary about, however, is that perhaps the images in the graphic novel version of the script could steer future directors of the piece away from having original thoughts because Lepage has so clearly given the audience what he thinks is the right way to do this piece.

Theatre is an art form. It is meant to be changed an interpreted and I hope that people who tackle this project in the future will take the images with a grain of salt and still open their minds to the different ways they could direct and produce this play. 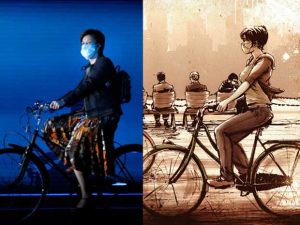 This is a side-by-side of a scene in the play vs. a scene in the book. While it’s amazing that Lepage was able to bring his story to life, I just hope that people don’t copy this book and his production verbatim, because then there would be no point. Even if you see the same play 100 times, you should leave the theatre with a different thought about the piece than you did before because of the unique way the director chose to depict it. This won’t happen if they treat this graphic novel like a directoral bible.