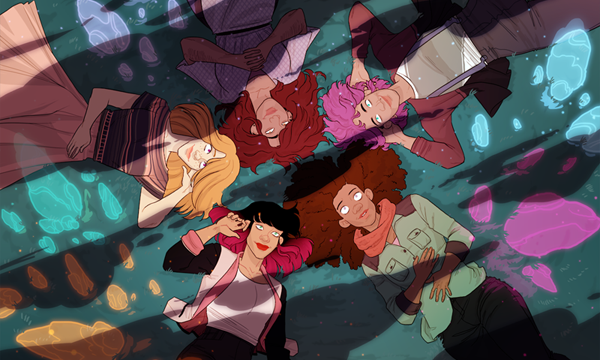 Have you ever read a comic you liked so much that the moment you put it down, you felt like putting your copy into the face of the nearest person and forcing them to read it too? That kind of moment is special to me as it doesn’t happen particularly often. You could say I’m too set in my comic routine as I keep reading the same comics I’ve been reading since middle school, with the exception of the ones that have since ended. Given this, imagine my delight at having a moment of, “Oh RAD,” when first reading the web comic Agents of the Realm.

First published online back in March of 2014 and created by Mildred Louis, Agents of the Realm can best be described as a coming-of-age magical girl story. (If you’re unfamiliar with the “Magical Girl” genre, pop over to this article, written by one of my classmates, Dominique Giles! I think she explains it all pretty well.) It centers on a team of five protagonists, Norah, Adele, Kendall, Paige, and Jordan, and follows their lives as they begin college and discover their destinies as protectors of Earth. It’s a comic full of action, cool transformation sequences, and perhaps most importantly, the power of friendship.

So, if at this point you feel like you’ve heard this story before, then it’s because you probably have. One relatively unfortunate aspect of magical girl comics is that typically they follow a very set narrative structure. You start with one girl, and then find three or four more, and then they save the world. It’s cool stuff although as a genre, it can lend itself to predictability and I’m fully willing to acknowledge that. However, don’t make that lead you to believe this is a Sailor Moon knock-off because guys, guys? It’s super not.

First of all, the characters are all unique from each other, with realistic and interesting personalities. For example, the second chapter starts with Norah having a conversation with her parents over skype where they encourage her to get out and try to make friends, despite having clearly high levels of anxiety towards it. It’s a conversation I’m all too familiar with having similar problems myself, and it made her immediately recognizable as someone I have something in common with. Likewise, each of her teammates has similarly distinct personality traits that allow them the be relatable without being too trope-y which is, again, a risk of the magical girl genre.

Secondly, this comic is pretty nice in the department of representation. Each character has their own distinct background, again showing how different they are as people. And rather than just giving a character a background and calling it a day, the author makes an effort to realistically portray characters within their backgrounds. The character Adele is an international student who originally comes from Brazil so when she is first introduced, she is having a conversation with her family in Portuguese, as would be typical for a Brazilian family to do. Furthermore, several of the characters are canonically queer! Jordan’s introductory arc has her trying to woo another girl in her dorm, Folami and Camel get engaged, and Jade is married to a woman. Thus, this comic is a
representation double-whammy having queer POC and honestly, I think that’s amazing.

Thirdly, the art is good. Like, it’s really good. There’s a lot of color, the characters have (again) unique looks that distinguish them from other characters, and everything is stylized and pretty. It’s not something that I think I can put into words particularly well so I encourage you to just check the comic out for yourself to get at the very least a better look at the art. It’s just really nice!

So, in conclusion, read Agents of the Realm like right now. Since it is a web comic it’s completely free to read on your computer this very second. Further, the author has released the first print volume of the story that you can pick up in both physical and digital formats. If you’re a fan of magical girl stories, this one really is an excellent addition to the genre and if you’re not then it’s still a lighthearted and fun comic to read over a weekend to de-stress.