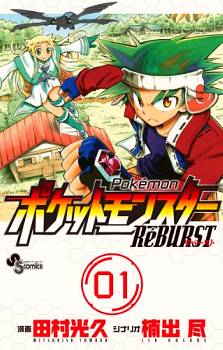 We all know that most adaptations are disappointing. It is almost inevitable that something we love will be turned into something so off-base of something we love– a book or a TV show or a game– that it breaks our hearts as fans. The video game series Pokémon has been adapted several times, mostly successfully.

While criticisms can be made about the anime or the various manga that have been based off of the handheld games, most of them hold true to the spirit of Pokémon. However, there is one manga that goes in such a bizarre direction that it is astounding that anyone even made it. I am speaking of Pokémon Réburst (pronounced RAY-burst, I’m assuming).

I can only speak for the first volume, or chapter as it’s called, but it veers off into its own world so quickly that the rest of the series would need to change wholesale to even fit into being an adaptation of Pokémon.

For anyone not familiar with the game series, don’t worry, the manga begins with an explanation. 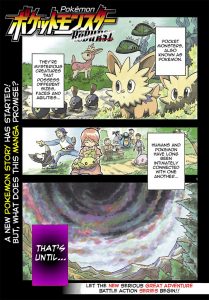 I hope you enjoyed those pictures of Pokémon, because when reading the manga, you will not see anymore until page 24.

Yes, the creatures in the title of the manga do not dare show their faces for 23 pages, and even then, they are mostly obscured in cages. This may sound confusing, Pokémon, for those unaware, are vital in the society depicted in the series. humans become friends with Pokémon and battle alongside them, defending their world. How, you may ask, would our young hero protect himself without a Pokémon team? 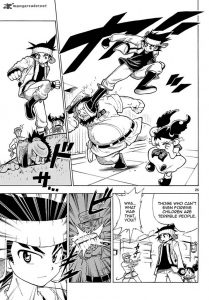 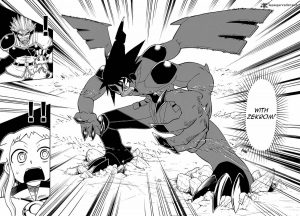 Isn’t this what you think of when you hear ‘Pokémon’?

Yes, the ‘burst’ in Pokémon Réburst refers to the protagonist’s ability to fuse with the Pokémon Zekrom and fight his battles for himself. This is emblematic of the problem that the entire manga faces.

As I said, Pokémon are never seen in the manga for several pages. They are mentioned, such as when the protagonist eagerly cries that he can travel with a Pokémon, but change the names, and the manga would be completely unrecognizable as a Pokémon product. It’s not bad for trying something new, it’s bad because it doesn’t seem to care about what Pokémon is.

Pokémon is not a ten-year old beating up small animals with their own team of captured pets. There are several games where Pokémon are not captured in Pokéballs, or battle each other. These games are still Pokémon because they understand the fundamental meaning of Pokémon, friendship and teamwork, even when you’re not exactly the same.

There is not a single Pokémon game that doesn’t mention at least once that the only way to be strong is to become friends with Pokémon. Power comes, not from brute strength or even smart tactics, but from caring for another being and understanding them. Pokémon Réburst doesn’t care about any of that. The protagonist works alone, completely. He doesn’t have a Pokémon who he works with and understands, he doesn’t ever have to trust his Pokémon.

The premise of the manga could fit perfectly fine with the themes of Pokémon. If the protagonist had a Pokémon he bonded with and fought alongside due to the strength of their friendship, as opposed to his ability to jump kick people, then this would be a perfectly serviceable Pokémon story. As it is, the elements of Pokémon are ignored in favor of the protagonist who is nothing more than a hot-head who can do everything by himself.

But don’t take my word for it, read for yourself and see.

1 thought on “Bursting With Potential”