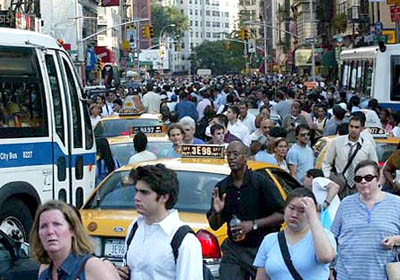 If you ever read Will Eisner’s comic, “Street Singer,” it’s not the type of story you’d want to read while blasting Taylor Swift’s happy-go-lucky jam, “Welcome to New York”, because, frankly, it’s less joyful.

Scratch that. It’s quite a depressing read.  Depressing, yet important.

Metropolitan areas, particularly New York City, represents a place for artists where dreams of all kind are able to come true, for lack of a better phrase. Most of us know that it’s gritty, expensive, dangerous, and over-saturated; yet, each year thousands upon thousands take the move to the big apple anyways, because it represents opportunity at its purest form– the American Dream. The notion that anyone, regardless of their respective backgrounds, is able to achieve their ambitions with due diligence and hard work.

This is an optimistic ideal that, in many ways, we as Americans have been brought up to believe. As much as I enjoyed Jay-

Z and Alicia Keys’ 2010 smash hit “Empire State of Mind,” the video, in a sense, over-glamorizes the city, emphasizing its bright lights and a crystal clear gray-scale filter. This isn’t to bash these artists, because in order to create entertainment, a professional polish is required to make them seem as ideals. Both Jay-Z and Alicia, in many ways, are thriving examples of the American Dream. They were both both born in the busy metropolis, grew from financial struggles and have become international superstars who have defied the odds through sheer dedication, and hard work. But are we making the mistake of viewing the exceptions as the norms? If people become too illusioned by glamorous media such Sex and the City and Gossip Girl, what kind of culture does that create?

I would say, especially after reading Will Eisner’s “Street Singer,” perhaps a shallow one. In the comic, situated in the big apple, we are introduced to the “diva” Marta Maria, who at one point aspired to become a professional opera singer. She put her dreams on the backburner after her marriage, yet still longed for her moment of stardom even after her husband had passed. She desires this so much to the point where she hears a street singer’s vocal talent and immediately welcomes him into her home. Although she knows very little about him besides his voice, she eagerly gives him a free place to live, and food to eat, and quickly even becomes physically intimate.

Yet, what if this street singer didn’t have a great singing voice? Would he have been so warmly embraced, or would he simply been seen a “bum”? My guess would be the latter, because Marta is driven by the mentality of needing to “make it,” to live up to the ideal of living rich and famous in the city. She sees personal career advancement through developing this street singer into a superstar, and this is what she bases off her bond, for lack of a better word, with him. He represents opportunity, returning back to this ideal of the American dream.

Still, there is no emotional intimacy shared between these two, as their connection is based off of superficiality. There are several scenes where the street singer is disengaged–in his own world, even– during conversations. In the beginning, as she discusses her professional past,all he could care about is food. He never reciprocates back the vibes she gives him, and vise versa. They aren’t a match whatsoever; yet, because their relationship is shallow and isn’t based on actual emotional connection, rather simply what one can get from one another.

The street singer even becomes physically abusive towards the Marta and her child, and, while Marta is most definitely not at fault for being abused whatsoever, I think Eisner may of been making a point that, 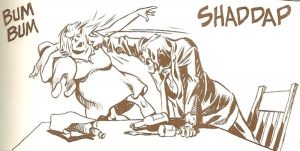 because she was blinded by her desire to measure up to become an American star, the relationship she engaged herself in proved itself to be unsuccessful.

I feel Eisner’s “Street Singer” could be seen as a bigger statement about how human relationships tend to be developed in American cities such as New York. There tends to be such a rat race to become rich and famous,to catch a “big break.” And because it’s so fiercely competitive, it tends to be the overarching influence of so many aspiring artists, etc. in the entertainment industries, and relationships tend to be based off of. But what good are these connections at the end of the day if they don’t delve deeper than what somebody can professionally do for a person? I believe that is the main point Eisner is making here.