Hey guys, it’s Candy, coming at ya with another Black Panther post. I know there are several posts already about the movie, and while a fourth one might be a little on the “overdone” side, there is something about this movie that I wish to talk about. And that’s the subject of Black Panther being way more than just your typical, everyday “Marvel Movie.” See, something I notice about Marvel movies is that they’re ridiculously fun. They’re filled with really cool superheroes, badass fights scenes, and humor. And while most of them are entertaining, they don’t really matter much outside of that. They’re just there for people who either already like the characters or the people who really like action. Which is fine. I mean, I fall into both categories, so no complaints there. But then, Black Panther came out, and to me, the difference between this one and the rest of the MCU is very plain to see. What I’m getting at here, is that Black Panther isn’t just “Let’s tell the story of T’Challa and move the MCU plot along”; it’s a cultural and political statement, bringing in all types of black representation.

Note: I’m writing this post with the assumption that most everyone has seen it, so there will be spoilers. Also, I’m gonna just jump right into the content without summarizing the plot, so be warned. I will also be talking about political and cultural arguments between two peoples, and in no way mean to generalize either side.

Let’s start off with the cultural bits of the movie. There is a ton of African and Black American cultural references within Black Panther. Looking from general to specific, the first point is the most obvious: the clothing. As Ruth E. Carter (the costume designer) explains, the Wakandan costumes are all inspired by real African tribes. Queen Ramonda’s crown is inspired by the Zulu people’s flared hats, the bright red of the Dora Milaje comes from the reds of the Turkana and Maasai tribes, the Jabari tribe is based on the Dogon peoples, and so on. At the same time, Killmonger’s museum outfit from the beginning of the movie is heavily inspired by mainstream urban-American styles, with his drop-crotch pants, combat boots, and grillz. And the clothing is extremely important, and not just in a “make Wakanda as real as possible” way. It’s representational. These are costume designs that are not common within Hollywood blockbusters, especially not superhero-action flicks. I can count on one hand how many times I’ve seen some grillz on a character in a superhero movie (hint: it’s one). On the flip side, I can count how many times I’ve seen African garbs in a superhero movie (hint: it’s still one). If we’re all honest with each other, I know I’m probably not that only person to have never seen costumes like these in a movie like this, to see representation of Black Americans and Africans. 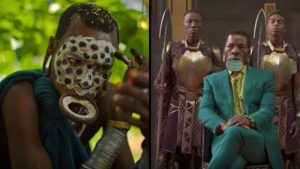 And it doesn’t stop there. Outside of the clothing, there is the shown importance of ancient traditions within Wakanda that allude to the way tradition is paramount in different parts of Africa. Think of how important the tradition of Challenge Day is represented within the movie, even as it becomes a threat to all of Wakanda (and the world). There’s the way Killmonger speaks, which can be described as African-American Vernacular English inspired (“Hey Auntie” is the best line ever, fight me on this). There is also the music. The original soundtrack (by Ludwig Göransson) is overflowing with African tribal inspired music, like this and this. Killmonger’s theme is a beautiful blend of a tambin (a flute native to the Fula people of West Africa) and a Hip-hop beat. All these little things strengthen this representation I’m talking about. It all (clothing, dialogue, music) helps the movie go from “making a superhero movie believable and compelling,” to “making this a part of an existing culture.”

There’s also the “political” side of what’s going on in Black Panther. Within the plot, there’s several different political questions being proposed. I’m going to skip the first and most obvious one that the movie poses, the “should a more developed country interfere in the affairs of lesser developed country,” mostly because it’s a question that could be asked of any other Marvel movie, and doesn’t interest me all that much. The political (and cultural) questions and problems that interest me are the ones that the existence of Killmonger bring about. The first problem I saw was the “African vs Black American” divide. Now, if you’re not black (like I am), you might not know that there is a lot of division and prejudices between those who are directly from an African country, and Black Americans. Most of this stems from the same sort of division that is present within the movie: “They weren’t born here, so they aren’t us.” This comes from both sides. From the arguments I have seen in my life, it seems that to African descendants, Black Americans cannot claim African heritage or culture because they were not born in a African country. They are outsiders who just also happen to be black. And to Black Americans, Africans are stuck-up for having this sort of view on Black Americans, and should stop “trying to be like Black Americans, then” (I’m paraphrasing, but it’s a sentiment I’ve seen a few times).

What’s fascinating to me is, not only does the movie bring up this conversation, it seems to want to try and answer it. While it falls a little short of giving any true answers to it, there are several bits where the sentiment of “African peoples and Black Americans are of the same ancestry, and are connected,” can be seen. The first instance is Prince N’Jobu’s (Killmonger’s father) motives for helping steal vibranium from Wakanda. N’Jobu states that while Wakandans live in a sort of paradise, there are other black people who are living in poverty and are oppressed. He wishes to band together with them and fight against those oppressors. He overlooks that his brother, T’Chaka, sees them as outsiders. What he sees is other black people, like him, suffering. Something else to look at is Killmonger’s return to claim the throne. This scene can be seen as a direct parallel to the “outsider” argument. Killmonger believes that because his father is directly from Wakanda, then he is also Wakandan and has a legitimate right to the throne. The elders of Wakanda believe that N’Jobu being his father is not enough. Killmonger did not live in Wakanda, and therefore is not Wakandan. It is the same argument that I mentioned earlier. It is also heightened when the history of black culture and civil rights movements are taken into account, as this sort of theft of African cultures happened during the late 60’s and 70’s (which is hinted at during Killmonger’s introduction scene in the museum). This outsider mindset is then negated by T’Challa’s acceptance of Killmonger’s challenge, which shows how the movie wishes to answer the overall problem.

Another political question that Killmonger brings with him is the question of how to fight against oppression. Killmonger, like his father before him, believes that literally arming the oppressed is the only way to overthrow the systematic oppression black people face all over the world. And while the opposition to that belief comes from more of a “don’t steal our resources” side (which is another topic), Killmonger’s ideals seem to echo an old argument from the Civil Rights movement: non-violence vs self defense. The idea of militant armed black response to fight against oppression comes from the titular Black Panther Party themselves. The BPP believed that by arming black citizens (in Oakland, California, no less) they could lessen police violence against black people. In popular belief, Malcolm X championed for black self-defense when necessary, while Martin Luther King Jr. believed in complete nonviolence (in my own readings about the two, I find that their beliefs were actually closer to each others than the media portrays). This conversation can be seen in play here with Killmonger, not between Killmonger and another character, but him and the audience. His beliefs call for the continuation of the conversation about how to defend oneself against systematic oppression, which has been the condition of Black Americans for more than 200 years. The last political problem I found within Black Panther‘s narrative is the stealing of resources from Africa. It is touched on twice within the movie (once from Klaue and then again with Killmonger) and is very straightforward. It touches on the historical colonization of African countries by European nations, and the theft of it’s natural resources (and people). 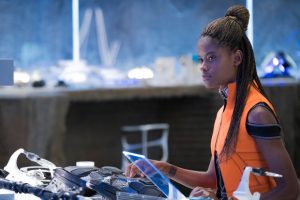 Shuri calling Frost a “colonizer” sums it up, honestly.

My last point for why Black Panther is more than a Marvel movie, is just the sheer impact it’s had on every, specifically black people and black culture. For many black people, this is the first time we’ve gotten to see black people as the main characters in a superhero movie since like…Blade. Its representation has already started to affect little black kids, as I very often see stories about little black girls wanting to be like Shuri or little black boys acting out the Challenge Day scene from the movie. It’s gotten to adults too, as many people dressed up in different African tribal clothing to see it on opening day, with a few groups even coming with tribal drums and playing in front of theaters before the movie started. 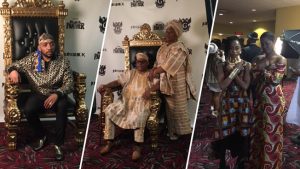 Opening Night was so lit

I’ve seen people start to embed “colonizer” into their vocabulary. The fact that almost all of the cast is black is astounding, considering how the MCU has been accused of being too white and whitewashing just a year or so ago (think about Tilda Swinton being cast as The Ancient One, who is supposed to be an Asian man). Heck, Black Panther‘s black cast is astounding considering the racial issue in all of Hollywood (#OscarsSoWhite for example). For black people, it’s a reminder that we are here, our stories do matter, and we can be anything we want to be. It’s a cultural celebration, and it’s that way because of all the bits and pieces of black culture that went into it. It’s not just great because it has action and cool superheroes like other Marvel movies. It’s great because it dives into what it means to be Black American or African in today’s society. It’s great because it reflects the culture of a people who don’t get to be in the spotlight that often. It’s great because it poses political and cultural questions that Marvel movies haven’t really done since maybe Iron Man. That’s why I believe Black Panther has transcended its “Marvel Movie”-ness, and why it has been rated so highly by many reviewers and people. Because at the end of the day, Black Panther (both movie and comic) isn’t just about T’Challa punching people or fighting aliens or whatever. It’s about being black and awesome. And that’s awesome. 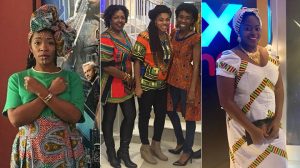 Look at all that gorgeous melanin