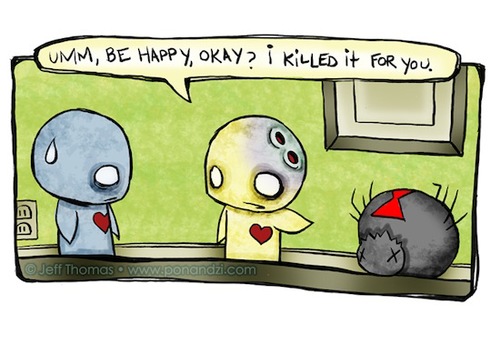 In many comics the author provides the reader with everything needed to analyze the characters. Readers are comfortable being given all the pieces of the puzzle, while the author sits back and watches to see if his audience can successfully put them together. I am particularly interested in the comics that do the exact opposite. 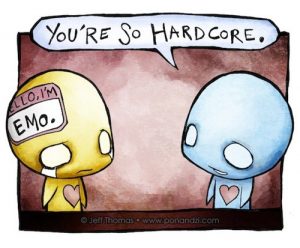 For example, Pon and Zi, a webcomic designed by Jeff Thomas in 2004, provides the reader with a panel by panel comic in which two characters set up scenarios that create a kind of love story. Normally one panel is published at a time, and their mushy lines about love created a fan base Thomas never would have imagined. 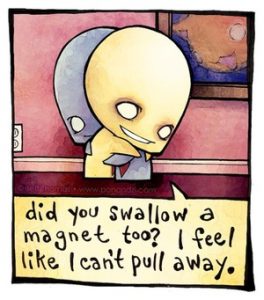 identified with a specific gender. He chose neutral colors as well as neutral names. Speaking of his decision, he said, “I wanted to avoid giving either character a gender because I wanted everyone to be able to relate to every comic and because I realize that especially recently, disregard to traditional gender rules is commonplace.”

Fans have made guesses for years about which character is which and the roles they play, but the reality is, it’s whatever you want it to be.

While we heard straight from the mouth of the creator that there is no specific answer, something inside of us still craves a concrete truth. It seems almost impossible for some readers to handle this amount of power that Thomas has handed them. His intent was to appeal to a wide audience and create a love story for anyone and everyone, but in addition it has created a mass of anxiety over fans who crave a concrete answer.

This response often makes me question if we as readers are equipped to handle that much power. Thomas is essentially handing the readers their own personal love story, granted it’s a tad depressing, but it’s individualized to fit each and every reader. And our response is that we need answers, not freedom. 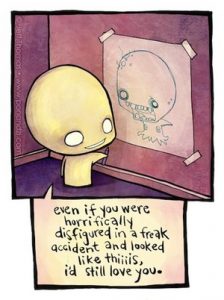 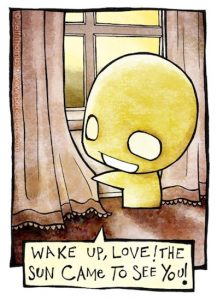 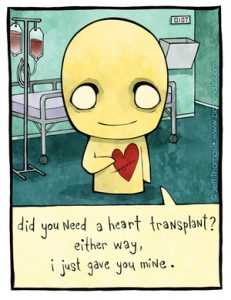 On the Pon & Zi Artbook Kickstarter page, Thomas does reveal a few answers, in that Pon is the yellow creature and Zi is the blue. Pon is often the love struck one who goes to any and all lengths to prove their love for Zi. As you can see in the photos above, Pon is often featured in panels alone, always overcome with love. However, this isn’t enough to put the restless minds of once upon a time, emo-adolescents at ease. Our desire to push further and unveil every hidden answer comes to a crashing halt as we realize each and every person’s truth will differ from the next. So I ask, do we as the audience really want that kind of power?

Here is the link to the official Pon and Zi website that showcases many of Thomas’s Pon and Zi panels.