In recent years, comic books have enjoyed a return to the center of discussion in popular media thanks to the raging success of Marvel and DC movies. Having just barely missed the perfect age to grow up reading comics myself, I’ve taken a lot of interest in listening to the discussion of inter-textual relationships between movies, original comics, and the different phases of each hero as their story is retold again and again and varied between parallel times-lines with a million imaginings.

Another large topic of discussion has been representation, in more than just comics. In media as a whole, there have been as many voices raised in favor or more varied representation as there have been arguing there isn’t a need for it. This has happened with movies not only in the instances of Wonder Woman (dir. Patty Jenkins, 2017), but also in the instances of Star Wars: The Last Jedi (dir. Rian Johnson, 2017), Black Panther (dir. Ryan Coogler, 2018), and many others.

Despite the simultaneous push-back against these movies about varied types of characters, these movies were incredibly successful and received tons of praise from audiences. They also sparked a lot of discussion about things that I, otherwise, would have never heard about. 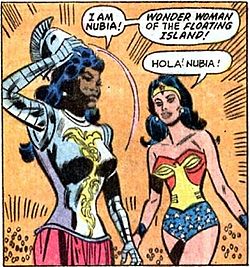 In 1973, a female warrior claiming to be the one true Wonder Woman challenges Diana, and later reveals herself to be Nubia. Their mother confirms this. In short, the story that Diana was molded from clay and brought to life is true, but incomplete; Nubia was also molded from clay at the same time, just of a different color. The reason she’d been missing so long was because she was kidnapped and raised by the god Mars early on.

Nubia, unfortunately, never got as much attention as the more recognizable Diana Prince, but is just an interesting a character. The Wonder Woman twins have identical powers of super strength, speed, and more, and compelling stories and backgrounds. However, likely a product of the time in which she was introduced, Nubia has remained comparatively invisible in the shadow of Diana Prince’s fame.

Where the discussion of representation in media is heated, especially on the importance of minorities seeing someone ‘like them’ on television, it amazes me that only once, in a Tumblr post lost to the depths of the internet, have I seen Nubia mentioned. Most of what I know of her has been my own research, and is vague at best. Instead, when I see discussions of black superheroes, I’m most frequently hearing of either ones who have been popular for years – like Static Shock, or Cyborg – or ones who have become well known in recent years – like Black Panther, and Luke Cage. The subtle problem there is that all of these characters are male, and are different. They bring with them new settings, new casts of their own supporting characters, and a complicated way that they fit into the larger worlds of Marvel and DC comics.

Nubia, on the other hand, is another part of the Wonder Woman story, a story that’s been widely known and enjoyed by audiences practically since it’s creation. As people are getting more and more interested in the deeper history of comics, and bringing them back in newer waves of media to unfamiliar audiences, I’d love to see more of Nubia. Maybe even one day, we could even get a re-telling of her story, like we’ve had a retelling of Diana’s.

1 thought on “The Forgotten Wonder Woman”