If you’re not familiar, first of all, why? Its a classic satirical cartoon show that explores the joys, trials, and nuance of Blackness.

The comic turned cartoon show is created by Aaron McGruder. It is told through the perspective of two young Black boys who live in the suburbs with their grandfather.

On of my favorite episodes has got to be season 2 episode 11, “The S Word.” In the episode, Riley, the younger brother, is called the N-word by his teacher, his white teacher no less. 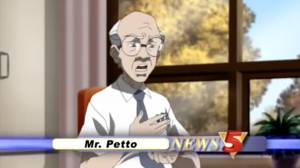 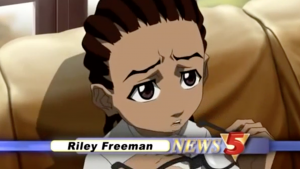 While being interviewed by a news channel, the teacher argues that since Riley used the N-word all of the time, and was using it towards him when the incident in question occurred, he thought it okay to say it back to Riley. At this point, the teacher’s delusion and apparent lack of historical or cultural nuance is annoying because it sounds to me too much like the white people who use the word in real life.

Then at one point in the episode when the teacher is being interviewed by the school board he recalls an interaction with Riley declaring: “… he says [the N-word] so much I don’t even notice it anymore. Last week in lunch Riley says to a classmate, ‘can a nigga borrow a french fry.’ And my first thought wasn’t oh my gosh he said the word, the N-word. It was, now hows a nigga gonna borough a fry, nigga is you gon give it back?”

And I have to be honest, it is one of the funniest lines in the entire episode to me. The realities of this scenario are that an old white man is talking about a little Black boy in the United States of America. A country constructed on the backs of enslaved Black people, who for the last four hundred years have been dehumanized, silence, segregated, murdered, commodified, lynched, raped, isolated, ostracized, humiliated, disrespected. But yet, a white man, to whom all of the country’s resources beget loyalty to, dares that he too must be allowed to find comfort and joy in a activity that Black people take part in.

The comedic gold in all of this, the reason I can find humor in this is because, it actually happened in real life, and laughter makes the ridiculous not hurt so much.