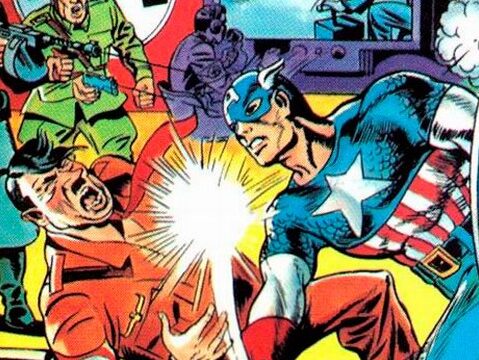 There are many examples of Superheroes from the Golden Age of comics (Late 1930s to mid-1950s) that were created as direct opponents of fascism, and many villains represented, or literally considered fascists. Jack Kirby, the creator of Captain America and many other major characters in the Marvel Universe, is famous for his efforts to ward off fascism both using his art, and using his body as a soldier during World War 2. Many far right extremists are co-opting, or at least using, symbols associated with comics to further spread their ideology. Many comic writers are discouraged by this and want to make this stop but how it needs to be stopped is not necessarily in their hands. The mainstream culture around comics and superheroes must be changed in order for young people not to be pulled into far right movements that tell them that they can be the heroes.

In recent years, the far right has been utilizing many symbols from comic books a lot to spread their ideology. Especially the Punisher symbol, and the Guy Fawkes mask, both symbols that represent characters that are strongly and unapologetically going against the status quo. These movements are utilizing young people’s dissatisfaction with American politics and culture to force them into right wing ideologies. Young people desire to see change, and are more than willing to be that change in the world, and when there are people telling them that they can be heroes by fighting the left, then some of these young people will follow along.

Both Punisher and Guy Fawkes in their comics are considered to be anti-heroes, and both were made with the intention of being actively anti-fascist, or at least anti-authoritarian, something antithetical to traditional fascist ideology. Alan Moore, the writer of V for Vendetta, the graphic novel which the Guy Fawkes mask first appears, has always tried to separate his character from the real world instances of his mask being used in protest movements. The punisher symbol has a slightly different story behind it. Many are calling for a reclaiming of the symbol and “taking it away” from the far right movement by applying it to racial justice movements that the far right opposes, although this might not be the way, or at least some comic writers do not think it is. Instead they have opted to change the logo for Punisher outright to a new one representing an Oni, a Japanese demonic folktale creature that in modern culture is often represented something that fights off bad luck.

Modern writers and artists of comics want to see positive change in the world and many modern stories in comics are inclusive and some explicitly anti bigotry; however, the representations of many of these characters in the mainstream might not be the same as it is in modern comics. These characters are often known simply by how they are presented in film or how adults remember them from the cartoons they watched as a child, so people’s understanding of these characters is often incomplete or simply a faint memory. To change the mainstream ideas of who the “good guys” and the “bad guys” are in comics, we need to change what the mainstream sees. We need to change how we talk about good vs bad in general. Heroes are not necessarily heroic, just as they do not necessarily fight evil. A strong man telling a young boy that he can be a hero someday is a sweet thought, although being that hero is likely to come at the cost of something, or someone. We don’t need more people trying to be heroes in real life, we need more people willing to care for those around them and for more people to sustain a strong solidarity with each other.

So many of the important faces in comic book history were people that immigrated during World War 2 and found new identities as artist and writers. Many of these writers faced antisemitism in the field of comic books in addition to everywhere else. Many secular Jewish men that faced horrible violence and hatred because of fascist ideology are the reason that comic book characters are as prolific today as they are. Some of these writers and artist fought fascism with their entire being. They made it an integral part of their life to fight hatred bigotry and far right ideology. So I hope to see more members of the comic book industry do that today.