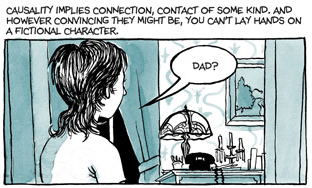 Allison Bechdel’s tragicomic Fun Home pushes the boundaries of what it means to be an autobiography so much so that it has coined a new term for itself: autography. In her article titled “The Space Between:
A Narrative Approach to Alison Bechdel’s Fun Home,” Robyn Warhol explains why Bechdel’s breakthrough memoir is deserving of a new genre label altogether. According to Warhol, there are two diegetic levels in autobiographic works: intradiegetic, which is the setting the actual story takes place in, and extradiegetic, the world where the author is currently living. The author’s past self lives in the intradiegetic world as a character while the author’s present self carries on in the extradiegetic world while writing their autobiography. Warhol suggests that autographies like Bechdel’s Fun Home introduce a new diegetic level: the world in which the animated characters live. This world of pictures is separate from the first two diegetic levels because they create a new type of character to live within the scenery. In a sense, there are now three Allisons: the past Allison, the present Allison who is writing the memoir, and the animated character Allison who inhabits the animated world. Warhol writes that while drawings are not necessarily required to portray a character, but they can add a lot more to the story: “Fun Home shows how the addition of the visual images to the verbal narration that occurs in autography can produce a depth-effect to characterization that goes beyond what prose autobiography typically can achieve.”

I find it interesting to think of works like Fun Home as completely separate genres. While it is a graphic novel, it differs from other works of the genre because of its autobiographical nature. It also differs from the traditional autobiography for obvious reasons: it is a visual narrative with pictures and speech bubbles rather than lonely prose. If a work does not fit neatly into a genre, what do we do? We can try to squeeze it into a bubble or we can allow it to live on its own. In the case of Fun Home, I think the latter is in order. Thus, the autography is born.