Calvin ad Hobbes was a daily comic strip by American cartoonist Bill Waterson, that was syndicated from 1985 to 1995. These strips were also compiled into a series of books that served as an archive for the newspaper strip collection, although some offered some new material as well. Calvin and Hobbes is about an adventurous 6 year old boy, Calvin and his tiger, Hobbes. Although everyone else sees Hobbes as a stuffed tiger, he is entirely animate in Calvin’s imagination. Together, Calvin and Hobbes go on adventures and tackle tasks that could only be thought up by Calvin’s overactive imagination. This post, I wanted to explore the elements  of Waterson’s comic that make it so timeless. He does this in three ways; Calvin’s extensive imagination, the constant interaction with the outdoors and nature, and the lack of merchandising surrounding Calvin and Hobbes.

The amazing thing about the comic is that it seems as though everyone can relate to it in one way or another. Though the strip was made between the years 1985 and 1995, people of all ages still adore the comic today. This is because everyone remembers being a child and having an expansive imagination, though Calvin’s is a little over the top. Though we know as readers that Hobbes is not real, we put it aside, or even forget that fact all toge

ther. We get immersed in Calvin’s world, and everything that’s real to him becomes real to the reader as well.

An aspect of Calvin and Hobbes that makes it so lovable is Calvin’s constant adventures he has in the great outdoors. The two are often exploring the woods, climbing trees, and bombing hills in their wagon. You can often recognize areas they’re in from previous strips as well. These strips in particular leave a feeling of wonder and innocence that really becomes the most memorable part of the strip for many people. 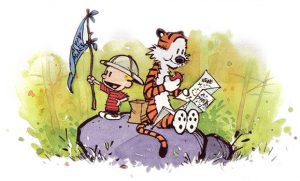 Another thing that makes Calvin and Hobbes unique is that there is virtually no merchandising of the franchise whatsoever. Despite the comic’s immense popularity, Bill Waterson refused to sell out in order to keep the spirit of Calvin and Hobbes intact. In an interview, Waterson once stated, “Actually, I wasn’t against all merchandising when I started the strip, but each product I considered seemed to violate the spirit of the strip, contradict its message, and take me away from the work I loved. If my syndicate had let it go at that, the decision would have taken maybe 30 seconds of my life”. This is all the magic of Calvin and Hobbes are kept stored away in the books. Although Waterson could have made an absurd amount of money off Hobbes dolls and Calvin T-shirts, he put the art first, and by doing so, kept the charming nature of his comic alive. 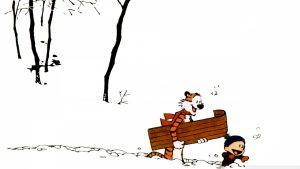