My experience with comics has been pretty limited prior to reading in this class. I’ve taken some interesting classes here at Mary Washington that have either briefly included comics or have focused on studying the power of images. From Visual Rhetoric, to Global Issues in Literature (where we read Persepolis– the first graphic novel I studied), I’ve been intrigued at what images can do when applied in different settings.

Now, like I said, I’ve only read a handful of comics in my life. We studied Persepolis, the first few chapters of V for Vendetta, and my grandpa used to cut comic strips out of the Sunday paper for me– but only the ones making fun of kids for texting so much their thumbs fell off. Well, imagine my surprise when I was cleaning out my bookshelf earlier this weekend and I found Heroes: Volume One unopened and addressed to my younger sisters and I from my Aunt Tania.

She gave us this book a few years ago for Christmas because we loved the TV show, but it had never been read!

I flipped through the book and in addition to seeing the characters I loved in middle school (Peter Petrelli, I will always love you), the spatiotopic parameters like the form of the panel, area, site, hyper frames and multiframes (thank you, Groensteen and McCloud for the vocabularly) were unlike anything I had seen in my previous readings and in our class so far. To be fair, we did see some experimentation with panels and frames with Nemo and Donald Duck, but the Heroes book seemed to push more boundaries.

Here are several examples from the thirty-four stories told in the graphic novel that demonstrate the power of “the gutter” and that closure has when reading comics. 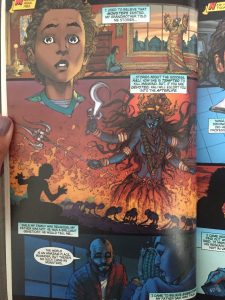 In the first installment of “9th Wonders!” featured in the text, we are shown three panels of Mohinder learning about monsters as a child in Madras, India. The image of young Mohinder in the first panel runs over into the second, which was interesting to me because I haven’t seen many images that jump over the gutter in between panels. The second panel illustrates the story about monsters that his grandmother told him, so Mohinder-in-the-gutter aids in the transition from subject-to-subject as we are see how Mohinder feels about the monsters (terrified, it seems) throughout the two panels. I also noted that the gutter is colored black, instead of being white space, which contributes to the ominous atmosphere created by the subjects. In other issues of “9th Wonders!” the gutter is the tradition white, or it is a different color that has a specific significance to the story.

The next featured installment focuses on Hiro, a character who finds himself capable of teleportation. In these panels, the first thing I noticed was how different its organization was from most comics. It’s not formatted like a strip, there are no even boxes, and there even appears to be an original p 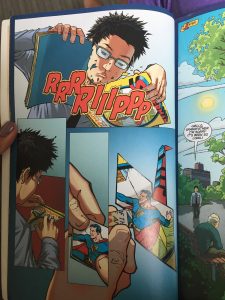 ictures that the other boxes are positioned on. We saw bits of this style in A Contract With God, too. Also, I noted that we get aspect-to-aspect transitions in these panels, which McCloud already notes is traditional in “Japanese mainstream comics” as this transition is usually employed “to establish a mood or a sense of place, time seems to stand still in these quiet, contemplative combinations” (McCloud 79). While this scene has the ripping sound as noise, Hiro is still alone and contemplative. He is intensely studying turning his Superman comic into a paper crane. It seems like every type of transition that McCloud discusses is seen in the entire first volume of Heroes, but the nod to Japanese comic tradition with Hiro, a Japanese character, seemed appropriate.

My final example example features Claire Bennet. How could I not include her? If you save the cheerleader, you save the world. 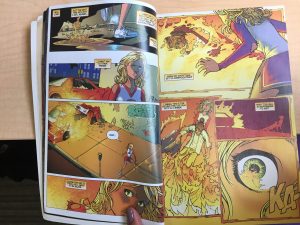 After being raped by a football player, Claire crashes the guy’s car into a wall with him in the passenger seat. Because Claire heals rapidly and virtually can’t die, she walks out leaving him there when the car catches on fire. Again, I want to focus on what the transitions and “gutter” to enhance the narrative. As we can see at the top of the left page, the margins are pretty traditional– they’re white, evenly spaced and we have some action-to-action transitions and even an aspect-to-aspect transition in the final panel, pretty standard stuff. But, as the fire rages on and starts to spread, we see the fire consuming the hyperframe on the right page. At the top, we still have a white margin, but the actual border of the panel has turned into a yellow, roughly sketched line, which closure tells us is the fire. We also see Claire’s body jumping over the gutter, like in Mohinder’s, and her aggressive stance shows us that she’s about to perform an action. Continuing down the page, the gutter in the middle of the page is fading from the white margin to yellow– the consuming nature of the fire is being reinforced by the “unsaid” in the margins. The border around the final panel has even turned into a darker orange than the yellow at the top of the page. I loved how visually dynamic and dramatic the scene became due to the margins, transitions and borders. Groensteen’s idea of the margin being representative and “part of the exterior support of the hyperframe” is at play here; the margins aren’t there just to confine the scene but they add something to it, and are worthy of being analyzed as well (Groensteen).

When first learning about “the blood in the gutter” and the significance of silence in comics, it was a difficult concept for me to grasp, partly because I’m so new to this medium. This graphic novel demonstrated many of the theoretical elements from Groensteen and McCloud’s research on understanding the systems of comics. I’m excited to continue to see comics that explore the medium and all of its possibilities! Also, my love of Heroes has been reignited and I think I’m going to recommit to finish watching the entire series (and yes, every episode is still on Netflix!!!).