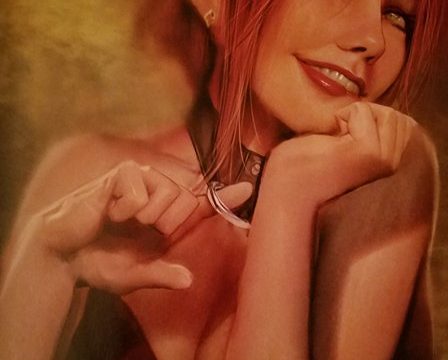 In graphic novels and comics, color plays a very important role. The presence, or absence of colors, or one specific color, can paint the way we interpret the images. This is especially true in the romance genre, and in the series I want to look at, Sunstone. Sunstone is a romance series by Stejpan Sejic, one that focuses on two women who connect through their ties in BDSM. Another blog post, “Roped up in Perception,” covers the story of the series if you want more information. I’ll be taking a closer look on color in Sunstone and how it influences the emotions in the comic. In Sunstone,  red is very prevalent. Red is the color of Lisa, the submissive of the pair, as well as a general color of romance. Throughout the series, red plays a very important role. It shows the passion and the devotion, it shows the thrill of their games. People use color to help interpret the world in everyday life. Blue is seen as sad, or as water. Green is earthy and calm. Red is fire and romance. Pink is love. The same holds true for this comic.  Ally, the dominatrix, has the color back. Lisa is the color red. When Ann comes in much later, her color is yellow. In this series, the shades of red are some of the most important colors given. In the first volume, which I’ll be focusing on, Lisa is the main focus, and red dominates the panels.

Throughout Sunstone, red plays different roles. Here, it shows danger, and passion. This is the scene where Ally and Lisa first meet, as a Dom and a Sub, and both experience their first night in a BDSM session. . Look at Allison’s face compared to Lisa’s expression. Allison has complete control of the scene, and Lisa is very quickly falling into her games. Despite all of their knowledge, both of them are new to this.  The colors here, the dark red of Lisa’s dress, the way Ally’s face and clothes are shaded in red, give the reader a sense of excitement and danger. I’m not sure if the words come through, but I’m not really sure they need to in order for the emotions of this panel to shine through. Allison is explaining the rules of the night, while slipping into her role of Lisa’s Mistress. Lisa is quickly sinking into submission, giving Allison almost full control.

Now that red has been shown to represent the passion and the romance between Lisa and Ally, as well as Lisa herself, the lack of red begins to play into the comic.  When the red begins to fade from the panels, we know 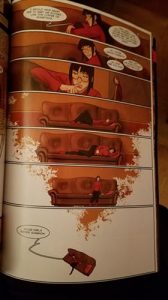 that something is wrong. Lisa has just left Allison’s over sized house, and suddenly the reddish walls are replaced by white, and we realize that Allison is lonely, and not just lonely, she’s specifically missing Lisa. She’s lived on her own for years, but now, as the red fades from the panels, leaving just Ally on the sofa, surrounded by a void of white the “house feels bigger somehow.” Lisa has left her house, and she’s taken all of the warmth and all of the color with her, leaving Ally alone in a very big, now very cold and colorless house.

There’s one more panel I wanted to talk about. During their scenes of play, red is everywhere, in fact, it’s very hard to find a panel in this comic that doesn’t have that color somewhere. Even this panel where Allison is 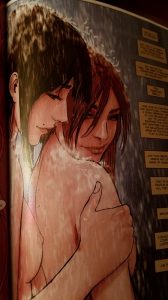 1 thought on “Coloring My Affection”