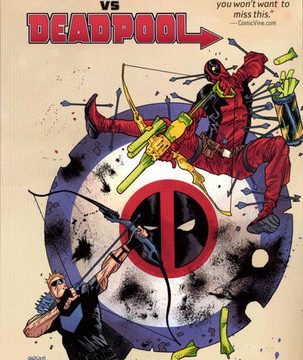 Growing up in a household with a mostly deaf parent can be interesting at times. My dad wears two hearing aids and does a lot of lip reading, and it’s something he’s dealt with since he was young. I never really see much about partial/total hearing loss in comics, which is why I was so interested by the comic book version of Hawkeye, particularly the more recent comics. 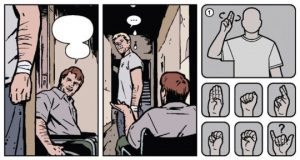 There are several versions of how Hawkeye loses his hearing, with the classic 1980’s version being due to a fight in which he detonated a sonic arrow in his mouth to bring himself back to his senses, but blew out his eardrums. His hearing was restored, but he eventually lost it again in more modernized comics due to The Clown jamming his own arrows into his ears. This becomes a huge part of Hawkeye as a character, and his journey not only to regain his ability to function without his ears. 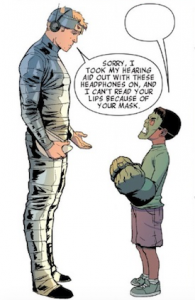 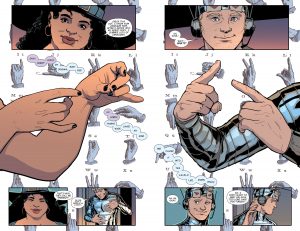 Bringing attention back to Clint’s coping with hearing loss, in enters Hawkeye vs. Deadpool, , but follows his style of Hawkeye, and does make a point to have to readers recall Clint’s hearing loss. One of the opening scenes in the comic involves Barton handing out candy, and having to explain to a young boy with a mask on that he can’t hear him, as he took out his hearing aids for the costume and can’t read lips because of the mask. In one of the following pages, there’s also a quick exchange in sign language between he and a woman.

One of the things about this comic that most caught me was Deadpool himself. Deadpool is known for being a wild character, volatile and strange. However, one of the interesting th 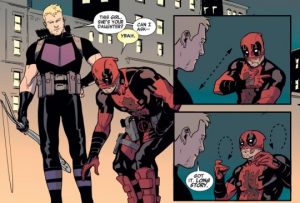 ings worth noting about Wade in this comic is his actions towards Clint. More than once, he’s seen with his mask pulled up to his nose, making his mouth visible. Although there are plenty of scenes in which he does this, it’s possible part of the reason he does so is that Clint can read his lips, as a nod to the earlier scene with the child in the Frankenstein’s monster mask. In addition, there’s also a quick exchange between the two in which Deadpool simply answers a question in sign language.

Clint’s hearing loss has not yet come into canon in the films, which I believe would be something important that should be noted, as it becomes a part of Clint’s character, and an important bit of representation. This comic is not even close to the only Hawkeye comic that acknowledges Clint’s hearing loss, and how he deals with it, but I think it becomes an interesting element between the characters of Hawkeye himself and Deadpool.