The gutter is defined as the space between defined comic panels in which the bulk of the action happens. As described by Scott McCloud in chapter three of his book (Blood in the Gutter) some of the most gruesome story telling takes place in the gutter of a graphic novel or comic. While the art depicted in each panel tells a story, it is often the space between the panels that hold the most detail.

How? How can that be that it is the white space that tells the story?

Well think of it this way: In his book McCoud tells us that if an act of violence happens to a character between panels you—the reader—get to subject him or her to an endless number of horrors. 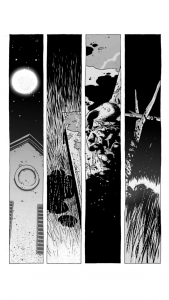 But the gutter doesn’t just come into play with violence. Any bit of transition is left up to the reader. Even an example as simple as one panel showing a young man in his house, an the next with him out by his car gives the reader (given they have an active imagination) an endless amount of possibilities dictating how our hero got from point A to B.

After learning about the gutter at the beginning this semester, there has been one particular use of it that has stuck with me. At the end of The Walking Dead Vol 11 Fear The Hunters, Robert Kirkman kills off the volumes antagonists (a group of cannibals) but he leaves the entire slaughter in the gutter (as depicted in figures one and two)

Kirkman is no stranger to graphic violence. Most people familiar with the series (even more so in light of the tv adaptation) are aware of the largely graphic nature of issue 100. And before that on a smaller scales, Kirkman didn’t have a problem depicting Violence. After all, he beheaded Tyreese and shot Carl’s eye out directly within the panel. So clearly, the choice wasn’t one of censorship.

Now I can’t confirm where the choice came from with out explicitly asking him, but I have a few speculations that I have been toying with over the last few months. The main one being, given the ideas presented above, that it was a matter of the punishment fitting the crime.

Think about it. Cannibalism is a pretty gruesome crime. I’d say it is within the top three most horrifying things someone can do. So if you want to punish someone for a crime like that, why not give them an end less number of punishments.

Kirkman isn’t just killing the hunters once. He is killing them off a dozen times over every time a reader picks up the volume. Furthermore, every time it is done in a new (and depending on the reader, more horrific) way. I think it is spot on the way Kirkman utilized the gutter. If you’re following Ricks eye for an eye model of you kill you die 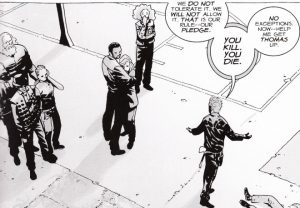 then killing these characters in the gutter really is the best way to go (short of making your own characters cannibals).

I think it is a great use of a story telling mechanic, and if given the chance I would love to pick Kirkman’s brain and figure out how intentional or how much thought went into his decision. In the mean time, feel free to discuss in the comments. I’d love to hear what you guys think.