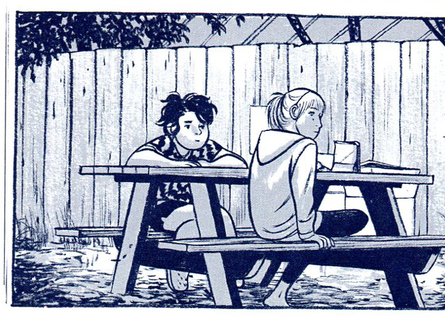 A theme that often occurs in the graphic novel “This One Summer” is the tug of friendship between Rose and Windy as they both face adolescence at different paces and stages throughout their lives. This theme can be seen multiple times throughout the novel, including: when they are at the beach and Windy is obviously more interested in boys, when Windy is dancing around having fun and Rose is silently sitting at the table, and when Windy wants to build a fort with Rose like they have done in the previous years, but Rose isn’t really that interested in it. These different paces and stages between Rose and Windy can be seen from the beginning to the end of the novel.

The first example of this theme occurs in the novel when Rose and Windy first hangout at the beach. Windy asks Rose if she has a boyfriend or if she likes anybody but the reader can tell that Rose isn’t really interested in the topic overall. On one hand, Windy is going through the stages of exploration and is interested in boys, but on the other hand, Rose is more interested in other things rather than boys and that exploration. 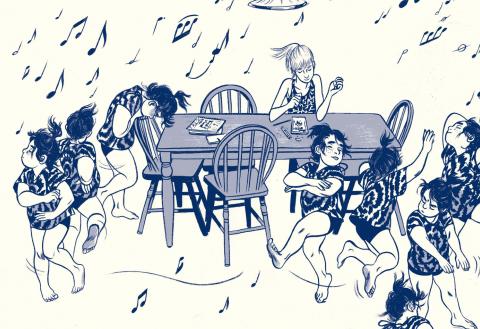 The second example of how this theme is illustrated in this book can be seen in the picture above. When Windy and Rose are hanging out Windy is dancing around to her own vibe, but Rose is sitting down, keeping to herself. Windy is being outgoing and acting how kids should behave, but Rose is acting very mature for her age. Rose mentioned that she is a year and a half older than Windy and with Rose being so mature for her age, you can definitely see that.

The last example of how Windy and Rose are in different paces and stages of life is when Windy asks Rose if she wants to build a fort like they have done in the previous years. Windy is obviously more interesting in building a fort than Rose is because Rose’s response is “Yeah. Maybe.” With this context you can see that Rose isn’t really interested in building a fort, another clue on Rose being more mature than Windy.

Through out the novel you can see many examples of how they have grown at different paces. They were both raised in completely different atmospheres, which also will contribute to this, but it is interesting to analyze them as individuals. If you would like to read another analysis of “This One Summer” here is a blog post by Heather Slota.