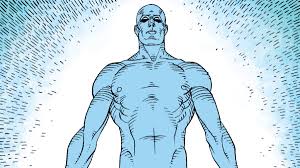 When talking about Dr. Manhattan’s love life, it is evident that he has been very unlucky in lasting relationships. From Janey Slater to Laurie Juspeczyk, Jon Osterman (aka Dr. Manhattan) has been unable to keep his girlfriends by his side. Many factors contribute to his inability to connect, but the one I want to focus on is his ability to process the past, present, and future all at the same time. Janey was unable to process how Jon could be apart of time in such away, as we see in Chapter 4, Page 16, Panels one and two:

I could not help but find remarkable similarities between Dr. Manhattan and that of the Greek god Apollo. Apollo was the god of the Oracle and seeing the future; he was also not a very good romantic. He was constantly being rejected or cheated on, partly because of his ability to see the future.

When comparing both Dr. Manhattan and Apollo, it is easy to see the similarities and consider how Jon might have been modelled after this lost in love god. Both are technically higher beings, both have a perception of the future, and both cannot seem to keep a steady relationship. While I do not know if that was Alan Moore’s purpose, but I find it interesting how similar they both are when comparing them side by side. In this blog post, the author describes in more detail Apollo’s own mishaps in navigating relationships.