Fantasy and science are often compared due to the radical concepts that can be employed for their respective genres. Eventually, you’ll reach a point where they’re indistinguishable from each other. Fantasy allows us to break the mold of reality and delve into new worlds without being halted by scientific impossibilities. While I prefer fantasy to something like science fiction, in a story more grounded with reality, science can become its own fantasy.

Imagine the world is dragged back to the stone age by an unexplainable phenomenon where all humans (and swallows) are turned to stone, and exactly 3689 years pass (the main character literally counted how long he’s been petrified) for nature to reclaim superiority of the world. Human progress and evolution have regressed, and it’ll take another few thousand years to catch back up, right?

With science, anything is possible. 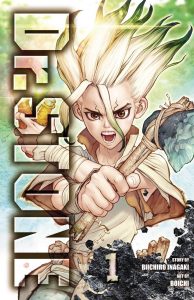 Senku Ishigami, the first human to emerge from his stone imprisonment, is one of the smartest people in the world, now the smartest human in the new world. He seeks to gather friends and allies to conquer the stone world and jump back to present time, beating the fantasy that cursed them to stone with science. With only the basic resources of an unrefined world and his unparallel intellect, he will make his kingdom of science and discover the truth behind the mysterious light that thrusted everyone back to the past.

This series is amazing and fun to read. It has interesting and likable characters, loads of humor, and gives a marvelous application to science in storytelling.

Most stories often use fantastical elements due to their popularity and general interest in exploring fantastical worlds. Dr. Stone, however, does this differently by sending our characters to an unfamiliar land despite being the same planet. There’s no magic and characters are limited to the resources they can acquire naturally. Senku refuses to believe the light that turned them to stone can’t be explained, as science always finds an answer no matter how long it takes. It’s basically Minecraft, just less cubes and more science, and this series has an unending wave of videogame references.

Things like modern medicine and electricity which weren’t discovered for thousands of years are now utilized in a matter of days through ingenuity and hard work.

What makes this series appealing, however, is how it allows the audience to experience the true power of scientific discovery and human evolution/adaption. Even though Senku has all the knowledge of human history to get back to civilization, a surviving village of humans still continue to make advancements in technology and science despite not having the knowledge Senku possesses. No matter how much humans regress from their technological development, there’ll always be curious minds pushing toward discovery. 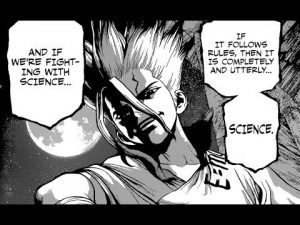 Readers get excited whenever Senku and his allies produce new equipment and items to improve their daily lives, and it’s not done through magic or given by a Deus ex Machina (though, luck probably also plays a factor into that). Something so mundane and commonplace in our advanced world like glasses, light, and ramen become huge milestones in the stone world. It’s just like when we first discovered these things, the joy of making progress for our own advancement.

This series is a testament to the progress we’ve made from the wheel to virtual reality. It’s definitely worth a read, especially for anyone who loves science, or even fantasy.

Fun Fact: the series name has a few meanings behind it. Dr. Stone can be interpreted as a reference to Dr. Albert Einstein, one of Senku’s personal heroes (he wrote the E=mc2 formula on his shirt in his own blood, that’s hardcore appreciation right there). Einstein can be broken down into two parts. Ein means ‘one’, and stein means ‘stone’. Some translations say it means ‘to surround and enclose in stone’.