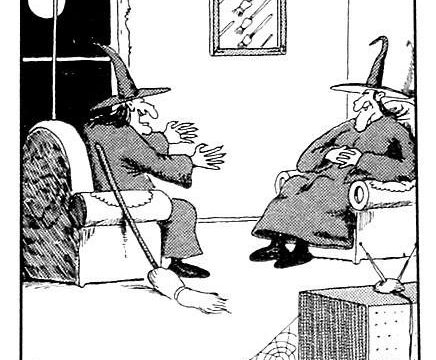 I remember sitting in my bed at the ripe age of eight reading through a book full of “The Far Side” comics. I would leaf through the pages, get to the end, and then turn around and read the whole thing again. I’m not sure where I came across this book, nor am I entirely certain if I fully understood the humor in these quirky one-panel comics; I just remember being fascinated by them. Now that I’m old enough to fully understand all the jokes, I have an even better appreciation for Gary Larson and his Far Side comics; they don’t need obvious punchlines or multiple panels to be funny because they have several layers on their own. 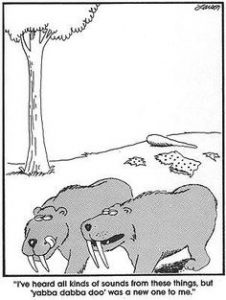 I find The Far Side to be quite different from other comic strips that we normally see in newspapers both in form and in humor. The one-panel design doesn’t allow for much buildup or for a punchline at the end; rather, the series’ humor is more blunt, dry, and at times a little dark. Take the above comic: there really isn’t a punchline, there are no panels, and yet it still tells a story. Upon first glance we may only notice the saber-toothed tigers. After reading the text we notice Fred Flinstone’s signature catchphrase and…what’s this? a very familiar spotted tunic. The punchline of the joke is embedded into the lone sentence at the bottom of the panel. 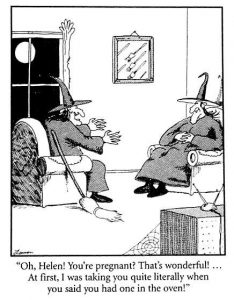 The Far Side generally made strange, surreal, and sometimes dark situations seem everyday and commonplace. The humor often lies in the seeming normalcy portrayed in the comic. As stated before, there is no real punchline as we know it in the comics. The comic pictured above is simply two witches having a conversation, but the joke lies in the double meaning of “one in the oven,” because, well, witches sometimes eat children. 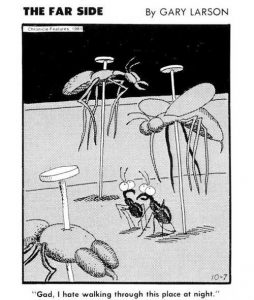 During its fifteen year run between 1980 and 1995, The Far Side brought a new flavor to newspaper comics. Its dry humor and quirky animation appealed to me as an eight year old and still continues to make me chuckle as a twenty-one year old college student. Its humor is a departure from typical comics seen in newspapers, and it still holds its uniqueness in 2016.