More like Mean Girls is the tamer version of Heathers, since Heathers after all did come first and stars the amazing Winona Ryder as the main character, Veronica Sawyer. While Mean Girls stars Lindsay Lohan as Cady Heron and in many ways the two movies are similar. Of course, Heathers is rated R, so there is more violence and profanity in the movie, however the concepts between the two movies match.

In Heathers the popular clique that rules the school are the Heathers (all three people in the clique are named Heather, while the fourth person in the clique is Veronica) and they all have a mean queen bee leader, Heather Chandler. Veronica doesn’t like being popular and doesn’t like her friends, she does not like the cruel things that the Heathers do. Quiet frankly, she is the only one with the brain in the group that is nice to everyone. Then, in Mean Girls a similar popular clique rules that school and that’s The Plastics, which includes the ruthless queen bee Leader Regina George, Gretchen, Karen, and Cady. Cady is like a tamer version of Veronica, she finds the Plastics to be cruel and feels out of place in the clique for a while. Also, Veronica and Cady both get back at their queen bee laters and that haunts them throughout the rest of the movie. Once they get revenge on the leaders of their clique, they realize that this whole popularity thing is joke and that it is important to be nice to people, while not taking the social aspects of high school too seriously. They also both have a love interest, but Veronica’s interest is a psychopath and Cady’s love interest is actually nice. Then, there is the fact that Heather Chandler and Regina George are similar; both being leaders of a powerful/popular clique in their high schools and are both feared. Since Heathers is a rated R movie, I find Heather Chandler scarier than Regina, but they are both out to ruin people’s lives and are very manipulative. 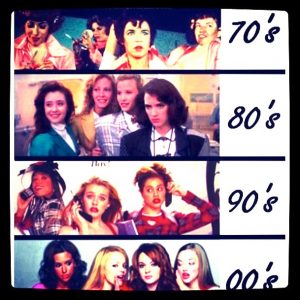 This picture shows more than just the Heathers and the Plastics, also the Clueless Clique were not mean and it also shows the Pink Ladies from Grease. However, one can take away from this, that no matter what decade it is, high school cliques will always be there. They may not be as hostile as the movies describe them to be, but the stereotypical cliques are still there. Also, there will always be mean girls, whether it’s the 80’s, 00’s, or 10’s.

Here is a source that relates to what I’m talking about and compares the Plastics and the Heathers.