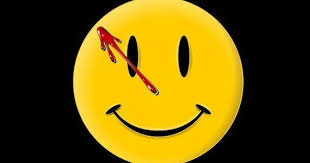 While reading Watchmen, I thought that Rorschach was a really interesting character. Although, while reading some of the panels I couldn’t help but think, “What if it happened differently?” So, I decided to pick out my favorite panel and make a few changes to it. 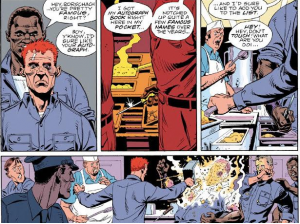 I actually only made one. In these panels Rorschach is in jail walking through the cafeteria line. In the original, the inmate tells Rorschach that he has an autograph book in his back pocket, when it is actually a shank. 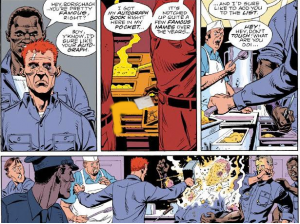 In the one I made changes to, it’s actually an autograph book. I thought this would be an interesting change because it would put a completely different spin on who Rorschach’s character is. Instead of him throwing hot grease on a guy trying to kill him, he’s killing a guy who wants an autograph. The main purpose of this is to change the character from the anti-hero he is into an actual villain with a minor change in the panel.

Following the theme of Watchmen I made one more out of panels later in the chapter. 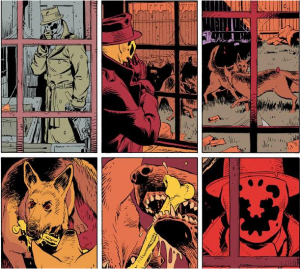 In this part of the chapter, Rorschach is explaining how he abandoned his birth name and actually became Rorschach. During this sequence of panels there is originally no text which leaves the audience to figure out what’s going on for themselves. I thought it would be interesting to see what these panels would look like with text. 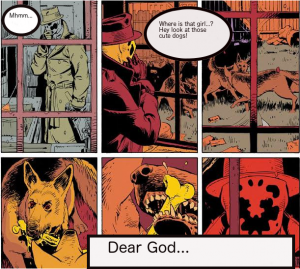 Using gimp I added text bubbles to demonstrate how this might look with Rorschach actually commenting for the audience. Doing this actually seems to take away a lot from the panels. Instead of the audience examining Rorschach’s facial expressions or the panels themselves, it gives away the tragedy right off the bat instead of adding suspense like the original.

1 thought on “Hero or Villain?”