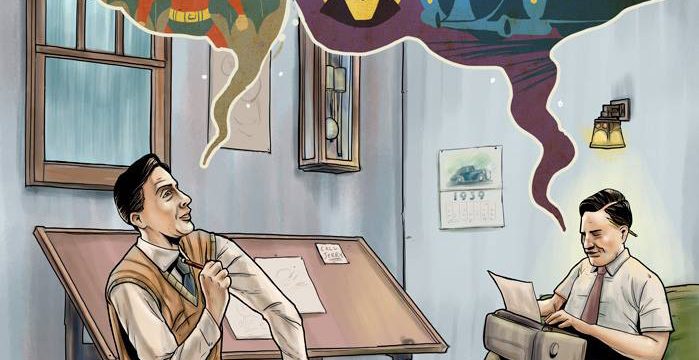 Self confessed documentary geek here! When in doubt I always go to documentaries, see what ever obscure fact I can find, and increase my knowledge about. This one absolutely blew my mind. As previously mentioned in other posts (I think) I love comic shows and comic movies, but I have never read one until this class, so I took everything I heard about them for face value. Which includes that until recently Bob Kane was the sole creator of Batman.

Batman is arguably the biggest comic of all time, and one of it’s co creators didn’t receive their due credit until recently. The story goes that Bob Kane was tasked with creating a new superhero, and had a rough sketch of someone with stiff wings, red tights (much like (later)Robin and (more likely) Superman) , no gloves, and domino mask. Bill Finger, revised the wings into a cape, tossed the red tights, gave him gloves, and tossed the domino mask for a cowl. So although the Batman we know and love wasn’t truly created by Bob Kane, he signed away the character in order to have sole byline credit on the comics. Asshole.

Meanwhile Bill Finger was doing most of the writing, and Bob Kane was the artist. In 1994 Kane gave Finger credit with the help of the creation of the Joker (that has it’s own controversy around it). The documentary Batman & Bill  shows Marc Tyler Nobleman and his journey to write this wrong. He tracked down the heir to Finger, and encouraged her to seek rights for Batman. In 2015 an agreement was reached, that from now on, in movies, and or Batman comics, Bob Kane would NOT be the sole creator credited.